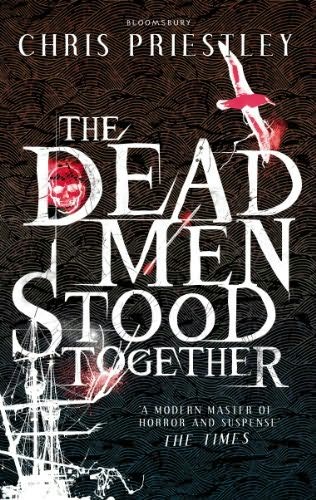 Chris Priestley delivers another cracking tale that will move both the spirit and soul through this offering. The book is short on page content, but massive on story content. The narrative rattles around your head like a deadly mist coming in from the sea. It's very bleak and atmospheric, but like all good stories it leaves you thinking. The traditional style is reminiscent of the good old yarns that have been told from generation to generation. In my opinion, this story will get better with age and time.

I rattled through this book with a delicious appetite for the dark, and the somewhat macabre feeling, which is normally associated with a book written by Mr Priestley. As usual he did not let me down. Elements of this book really make you think, whilst the rest of the story washes over you. The characters take you on a gothic sea adventure that contain a modern day twist based on Coleridge's book 'The Rime Of the Ancient Mariner'.
In a harbour town long ago, a boy is entranced by his uncle’s stories of adventure in lands far away. Ignoring the crazy talk of the harbour pilot’s son about the uncle being the Devil, the boy boards a ship with his uncle. But the uncle soon makes enemies of the captain and crew.
A terrible silence followed the thud of a albatross hitting the deck. All heads turned to the sound and each face froze in horror at the sight the bird they had all come to love lying stretched out on the boards.
I have to say that this was an epic part of the book - I really loved the way that these words pinged off my brain. My mind captured this scene in my head brilliantly.
This book is a compelling contemporary chiller that will not thaw when read. It is another fine example of Chris' great storytelling which doesn't necessarily seek a happy ending. In my opinion, not all stories should have or require one. I want the unexpected to happen and that is what was given yet again. It was such a pleasure to have this book on the reading pile. It's another read that I would recommend to everyone who loves a good spine-tingling adventure which has been painted in the very best way.......
This book is being published by Bloomsbury (hardback) on the 12th September 2013.