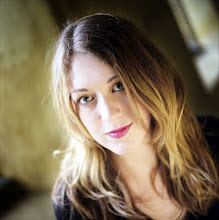 To mark the worldwide book launch today, Mr Ripley's Enchanted Books has had the opportunity to ask this rising star the following few searching questions about her exciting debut book and her writing:

1. You mentioned in your acknowledgements 'Thank you all for taking a chance on a dreamer.' Can you explain how you have 'dreamed up' the projected series of seven instalments and the orders that they have come to exist as?

The Seven Orders are the result of a lot of research into historical types of divination, from Roman augury to nineteenth-century Spiritualism and Native American spirit walking. I wanted there to be a sense of inheritance to my system, but also to put my own unique spin on each sub-type. I sorted them into seven 'orders' after looking at the similarities and differences between the different kinds and wrote them all up in On the Merits of Unnaturalness, a pamphlet that's mentioned in the book.

2. What or who has been a strong influential force in forming your writing?

3. How have you managed to combine mythological elements with your own fantasy writing?

I wanted the story to have a mythology that drew together threads from multiple traditions, rather than just one. The two main mythological influences were the Greek pantheon -- particularly the legend of Aphrodite and Adonis -- and the Hebrew Bible.

4. As you started writing novels at the age of fifteen, how has your style changed and developed to become a published author today?

It's come a long way since I was a teenager, especially under the guidance of my editor, who really helped me bring out the best in The Bone Season. I write very differently now to how I did when I was fifteen. I generally wrote in third-person at that age; I've now taken to writing in first, though I hope to try third again one day. I've learned a lot in the past year from my editors at Bloomsbury,  but I still have plenty more to learn. I hope my style will continue to mature and develop as I become a more experienced writer.

Book Synopsis: The year is 2059. Nineteen-year-old Paige Mahoney is working in the criminal underworld of Scion London, based at Seven Dials, employed by a man named Jaxon Hall. Her job: to scout for information by breaking into people’s minds. For Paige is a dreamwalker, a clairvoyant and, in the world of Scion, she commits treason simply by breathing.

It is raining the day her life changes for ever. Attacked, drugged and kidnapped, Paige is transported to Oxford – a city kept secret for two hundred years, controlled by a powerful, otherworldly race. Paige is assigned to Warden, a Rephaite with mysterious motives. He is her master. Her trainer. Her natural enemy. But if Paige wants to regain her freedom she must allow herself to be nurtured in this prison where she is meant to die.

The Bone Season introduces a compelling heroine and also introduces an extraordinary young writer, with huge ambition and a teeming imagination. Samantha Shannon has created a bold new reality in this riveting debut.

This is one of my favourite YA/Adult reads this year, so now it's your chance to read it for yourselves. My book review is here if you would like further confirmation on how good it really is.