Mr Ripley's One To Watch - Red Rising by Pierce Brown 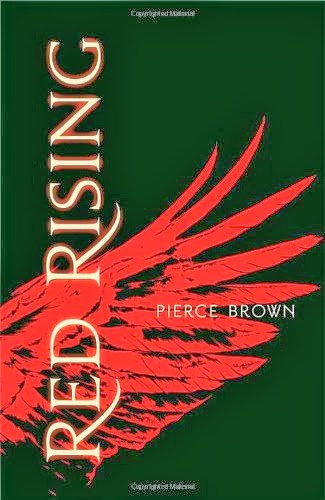 Synopsis: Darrow is a Helldiver, one of a thousand men and women who live in the vast caves beneath the surface of Mars, generations of people who spend their lives toiling to mine the precious elements that will allow the planet to be terraformed. Just knowing that, one day, people will be able to walk the surface of the planet is enough to justify their sacrifice. The Earth is dying, and Darrow and his people are the only hope humanity has left.

Until the day Darrow learns that it is all a lie. That Mars has been habitable - and inhabited - for generations, by a class of people calling themselves the Golds. A class of people who look down at Darrow and his fellows as slave labour, to be exploited and worked to death without a second thought.
Until the day Darrow, with the help of a mysterious group of rebels, disguises himself as a Gold and infiltrates their command school, intent on taking down his oppressors from the inside.
But the command school is a battlefield - and Darrow isn't the only student with an agenda.

Verdict: Crawling up the walls of dystopian fiction. Pierce Brown's top-notch debut novel, Red Rising, the first book in a new trilogy marrying The Hunger Games and The Lord of the Flies a really serious game of Risk. Brown's futuristic sci-fi world doesn't seem too far off from our own society, with the haves and have-nots, though on the planet Mars, the social strata is color-coded. The Golds, with glimmering eyes and hair, rule cities, starfleets and everything in between. On the opposite end of the spectrum are the Reds, the lower working class that everyone looks down upon.

One of those Reds is Darrow, a happily married teenager and the headstrong Helldiver of Lykos, one of many mining cities on Mars. The population of Reds have been told for years that they are gathering resources to make the surface habitable for them and future generations, but Darrow and his wife, Eo, discover that they've been lied to and that Golds and others have already created impressive cities and landscapes. In essence, the Reds have simply been used as slave labor the whole time.

In order to spur Darrow into action against this heinous treatment and fight for freedom, Eo sacrifices herself and is hanged publicly by one of the most powerful Golds, the ArchGovernor. Watching his wife die — and having to take part in it — sends Darrow on a bad path toward his own death. But he's instead recruited by the resistance group Sons of Ares for a grandiose plan: to transform Darrow into a Gold and have him take down the whole ruling society from within. Want to find out more grab the book....