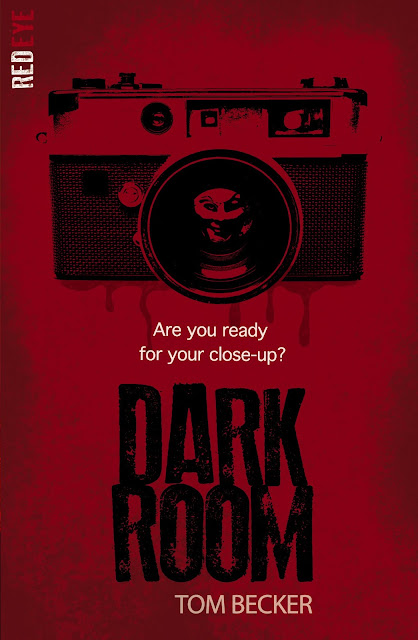 WARNING: Not to be read lovers of the Selfie.

This is the fifth title in the Red Eye series to be published and is coming at you, with killer moves, from September 2015. It is another outstanding written performance by Tom Becker; a YA horror shocker that will have you glued right down to the very last page and, only then, will you be able to take a breath. It's that good that I'm still thinking about the story even weeks after I have finished reading it.

I'm a very big fan of Tom Becker's previous books; this story is a very clever and a much more mature piece of writing than hisprevious works, in my opinion. It is very reminiscent of Stephen King - it will thrill you and kill you in the same heartbeat. It is a classic 'who done it' mystery consisting of a fantastic villain that will have you considering the final outcome throughout the story. The author sets out his stall from the very first page and leads the reader down a gruesome and grisly encounter that will leave you scared out of your skin . . .

This story sets the tone brilliantly and left me really intrigued; the author punches the reader with a bloody and brutal vision that will have you fully zoned into Darla's world. Darla and her dad are looking for a fresh start, running from the past again will turn their little world upside down with a bloody bang. They wind up in affluent Saffron Hills, where Darla stands no chance of fitting in with the beautiful, selfie-obsessed teens at her new school.

Just when she thinks things can’t get any worse, she starts having somewhat vague visions, which leads the reader's imagination into overdrive . The gruesome snapshots flashing into Darla’s mind seem to suggest she’s going crazy… until she realizes they’re actually a horrifying glimpse into the future. A serial killer is on the loose, known as the "Selfie Slayer", and is coming for Darla through the lens of a camera. A shocking and mysterious past unfolds with fantastic realism.

Teenagers will love this book, as they should really connect with the characters. The relationships between Darla and her father and friends is very turbulent, but at the same time, they are very engaging and fantastically well portrayed. Darla is not perfect like most of the characters in the other books which I liked. Her reactions to some of the gruesome parts might be a little inconsistent, in my opinion, and may not always contain enough feelings and emotions in places. She appears to react somewhat casually and nonchalantly at times.

Nevertheless, this story is one of my favourite books of the year. It is a reading pleasure - a large slice of contemporary, american teenage-life full of twists and turns. It will leave you frighteningly shocked and make your spine tingle. It is a fusion of popular culture and violence fused with the power of social media, which is very much in vogue. This is a clever and intriguing story which has a fantastic ending to a fantastic read.

Are YOU ready for your close up?

Other Red Eye Books: Dare you read a Red Eye?