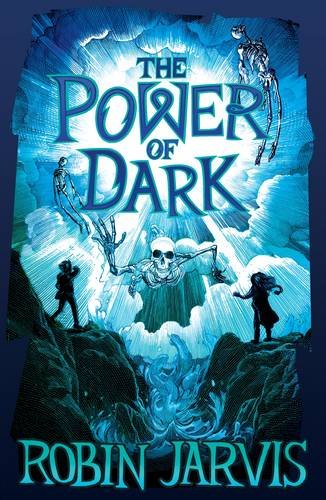 Something is brewing in the town of Whitby. To best friends Lil and Verne, it just seems like a particularly bad storm. But Cherry Cerise, the last of the Whitby witches, fears that ancient forces are at work, reviving the curse of a long lost magical artefact.
The legend goes that the Nimius was created by magician Melchior Pyke, with the assistance of a young witch known as Scaur Annie. But they were both betrayed by Pyke’s villainous manservant, Mister Dark, causing a feud that has survived even beyond death.
As Mister Dark, with his horrific winged familiar, arises to mastermind Whitby’s very own apocalypse and take the Nimius for his own evil purposes, can Lil and Verne join with Cherry to quell his plans and save their home?

Robin Jarvis is back with a mighty bang and a fantastic new series. The first book "The Power of Dark" will be published at the end of June 2016 by Egmont. There are also a further three more books to come in the series which will be published in six-montly intervals, which I'm really looking forward to reading. The first book is set in the town of Whitby, North Yorkshire. This is a place that Robin knows very well from his previous visits as part of "The Whitby Witches" series. It is a perfect setting and backdrop full of myths and legends and is one of the finest gothic settings in England.

The book follows two friends, Lil and Verne, who are inexplicably caught up in a supernatural adventure from the past. It will have you running up the 199 steps so fast that your feet won't touch the ground. You will be wrapped in a fantasy cocoon of magic, mayhem and horror. It's a genre busting novel that throws everything at you throughout the 255 pages. It will sweep you off your literary feet.

From the very first page you are quickly introduced to one of the main characters, Verne Thistlewood, as he is chased by a group of bullies. This sets up the story and sucks you into a narrative that soon leads you astray.  A storm is brewing on the cliff tops, there is a change of wind and a storm of skeletons appear that will give you the heebie jeebies. This scene is so vivid and crazy that it really made me smile at the creative inventiveness and the idea. It's fantasy writing at its best. It really did set the atmospheric tale on fantasy fire and made the plot come alive with a big bang.

You'll find yourself hurtling through this book in a fantasy frenzy. It is a yarn bombing experience of topics, magic and colour. The brooding darkness/evil slowly seeps through the story the more that you read. There is a fight against good and evil, but will the last surviving Witch of Whitby come out fighting with her Mary Quant bag in her hand? She will have you in stitches with her bizarre personality. She's not afraid to speak her mind and she certainly has a lot to say. She is a fantastically well written character with bags of personality;I hope that we will see more of her in the next books.

The town slowly gets sucked into a big crazy battle which is action packed and totally bonkers. It brings a climatic ending to an ancient feud that has survived even beyond death. This is a story of betrayal, love and revenge like no other....

I loved every minute of this book which makes it one of my favourite reads this year. Check out the fantastic cover which has been illustrated by Nicholas Delort. He definitely draws on the power of Robin's story and makes you want to find out what is inside...

Grab a copy as you will not be disappointed!