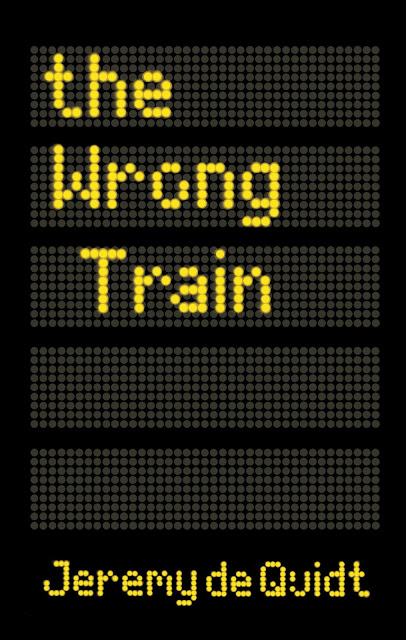 Welcome to the sixth stop, or perhaps we should call it a station, as part of this blog tour. I am delighted to be able to introduce 'What makes a great Halloween/horror read' post by Jeremy. It really is a chilling and cleverly written read. I certainly could feel my anxiety of the outcome beginning to surface as the anxiety and atmosphere intensified. It definitely highlights all of the main elements required in a good horror story - sleep well tonight!


The elderly man in the little bookshop thought for a moment.

‘What makes a great Halloween/horror read?’ he said.

He tapped the ash from his cigarette and leaned forward, leaned so far forward that his face was almost touching mine.

I waited for him to say something more but he just looked at me.

Is that it? I asked.

‘And atmosphere,’ he said. ‘Lots of anxiety and fear. Do you realise for example that we are the only people in this shop of mine, and that after you came in I closed the door?’

I said that I hadn’t noticed. But I noticed it then, noticed that the card in the window had been turned round so that it said ‘Closed’.

‘Scarier too when you think someone is safe and they aren’t,’ he added.

I’m just wanting a book for Halloween, I said. It’s a present - friend of mine’s not been well.

He drew again on his cigarette and glanced up at the wall to where two yellowing newspapers hung in frames. ‘Boy Disappears’ read one. ‘Body found on tow-path’ read the other.

‘And foreshadowing,’ he said. ‘You’ll be looking for a story with foreshadowing. That will ratchet up the fear, give you some time to think about what might happen next.’

He lifted the counter, shuffled past me and reaching up to a switch turned the lights out in the shop. There was some street light from the window, but the narrow shop was all darkness and shadows now. I’ve never liked dark or shadows.

‘Your story will need fears,’ he said. ‘We all have fears. Most people fear death and evil. Lots of room in a Halloween story for evil. I like a nice bit of evil.’

I think I’ll just come back later, I said.

He was standing between me and the door now.

Why not? I asked.

‘Pacing, you see,’ he said. ‘A good story is all about pacing. All that anxiety, those fears, they’ve got to build to something, got to to lead you on to the inevitable moment.’

Inevitable moment when what? I said.

For a second or two he didn’t say anything. Then he smiled again.

‘When the bad thing happens. We’ll all want to see that scene, won’t we. Won’t be a good Halloween read if we don’t see that.’

Then he turned and opened the door for me, stood to one side and let me pass.

I didn’t hesitate. I went straight through and out onto the street.

But to my discomfort he followed. He closed the door and locking it behind him looped his arm through mine. For all his old age that grip was as firm as iron.

‘And your story will need a twist to it too. We can talk about that twist while we walk,’ he said.

And it was only then that I realised that the passage beside the shop, the one that he was quietly but ever so firmly leading me down didn’t lead back into town, but to the old canal - to the canal and the tow-path that ran unlit, forgotten and unseen beside it.

Book review Here thanks for reading, have a safe and HAPPY HALLOWEEN!
By Mr Ripley's Enchanted Books on October 29, 2016