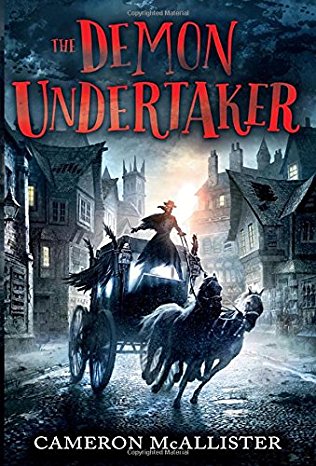 Cameron McAllister is a British television writer and producer. His first children's book was The Tin Snail, which is a fantastic read inspired by real events of how one little car changed history.
The Demon Undertaker is his second book, published this September (2016), it is a brilliant read for this time of year. For a spooky atmospheric read that will send your spine a-tingling, please read my book review HERE.

Let’s talk about writing! How do you want your readers to react when they read the last page of The Demon Undertaker?

“I MUST write a five star review immediately!” Obviously, that would be a great reaction. But more than anything, a writer wants their reader to come away wishing the book hadn’t ended, but at the same time feeling it ended in just the right place. I hope with THE DEMON UNDERTAKER they feel like they’ve been taken on what you called a breathtaking “stagecoach” of a ride. The book is definitely intended to be full of thrills and spills, as well as spooky – not to mention downright gruesome – moments. But I think if that’s all it was it would feel a bit soulless. I always try to find a story with a big human heart, so I hope readers will come away feeling they’ve had their heartstrings plucked a bit too!

Where did you get your spooky inspiration from?

One of my biggest inspirations was the Childcatcher in Chitty Chitty Bang Bang! I also liked the idea of London being a bit like Diagon Alley in Harry Potter, full of secret back alleyways. As well as this, I did a lot of research into grave robbers and surgeons looking for corpses to dissect. The idea for the Undertaker himself sprang from thinking how someone might best disguise themselves if they were snatching victims off the street. It was important to have something visually strong and ghoulish. Something wrapped up in death. I also discovered that the year in which the book is set was the first known use of the term “vampyre.” So I wanted to make my Demon feel supernatural – that way people might think he was the living dead!

I’d also been wanting to write something for a long time about the real life magistrate Henry Fielding. As well as a famous playwright and author, he was effectively the chief of police and was credited with creating the first prototype for the modern-day police force, the Bow Street Runners. Lots of other books have tackled the Runners, so I wanted a unique angle. Henry Fielding was a bit of a rogue in his youth, so I thought it would be fun if it was his teenage nephew who was really behind the creation of the Runners. What better than London’s first detective agency being manned exclusively by kids! 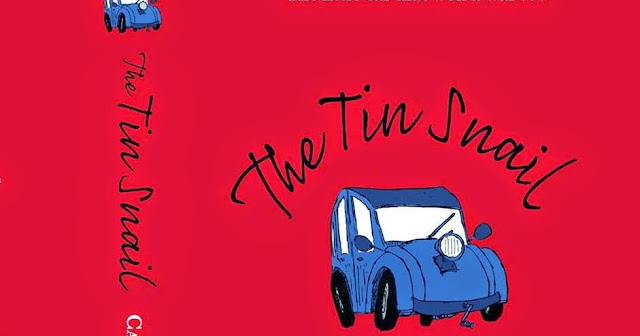 Do you ever research real events, legends, or myths to get ideas?

With this book and my last, THE TIN SNAIL, I used elements of real events and mixed them with a good dose of invention. In THE TIN SNAIL it was the remarkable story of how the 2CV car was invented in secret during WW2 so the Nazis couldn’t steal it. Once I’d found this story it was great fun adding invented characters and stories to flesh it out. Likewise, Henry Fielding, the magistrate in THE DEMON UNDERTAKER, was a real person. I did a lot of research into him and London’s sinister underbelly of crime. It was almost a struggle to fit all the gruesome things I discovered into the book!

What are the differences between writing a script and writing a book?

The biggest difference is that you generally don’t have to describe things much in a TV or film script – you just write a stage direction saying “Sinister back alley.” If you did that in a book, the reader would rightly feel cheated. The novelist’s job is to conjure up a vivid image in the reader’s head. So describing locations and what characters look like all adds to the flavour and atmosphere. Likewise, in a TV script you rarely describe what the character is thinking inside their head or what they’re feeling – it’s almost always just done in dialogue. After all, the viewer isn’t going to read the script. In a book you have a fantastic advantage – you can describe EVERYTHING your character is experiencing! That way the reader is completely walking in their shoes.

What, in your opinion, are the most important elements of good writing?

The best writers make you feel like you’re totally inside the character, feeling and thinking everything they are. “Insight” is a key word – the writer needs to know the character’s innermost thoughts. The more authentic the character and their world feels, the more vivid the reader’s experience will be. As well as this I want a really juicy story. Everyone looks for different ingredients in a book, but I love a really gripping plot that keeps me guessing and, just when I think I know what’s going to happen, there’s a big twist to subvert it.

Another big ingredient for me is what you might call “heart” – I need to really care about my hero (or anti-hero). People mistakenly think this means that heroes must always be completely “good”. I think this sometimes makes them a bit boring. I prefer my heroes to more realistic – which means they do good AND bad things like the rest of us. The important thing is that they’re INTERESTING and they have a chink in their armour – a way that lets you see into their secret vulnerable side. People who are vulnerable on the inside are often the most interesting to read about because we all identify with people’s fears and insecurities.

I usually find that if a character is also BRAVE or FUNNY, I can forgive them a multitude of other failings. Hermione in Harry Potter could have been a really boring goody-two-shoes, but she’s so brave you can’t help but love her. Likewise I deliberately made Esther in DEMON UNDERTAKER quite bossy and standoffish. But you soon discover she’s vulnerable and warm on the inside, but also very gutsy. I loved her character so much I’m making the hero in my new book a lot like her!

I’ve just finished a first draft of a new book that’s a bit older. It’s a supernatural thriller about someone who discovers that everything they thought about their life is based on a massive lie.

One of the shows I’ve written on was a series called PRIMEVAL about dinosaurs coming back from the past. When we were making it I discovered that the best way to scare the living daylights out of children – and adults – is very simple. Just make them think the monster/baddie is about to jump out on the hero at any moment. The longer you sustain this, the more suspense there is. For me, suspense is the most important ingredient. Often, when the monster does jump out, it can be a bit of a let down. That’s why the best scary movies won’t show you what the monster looks like for about an hour. The longer they can keep you in suspense, the more scared you are because NOTHING is ever as scary as what’s in your own head. Except perhaps the monster in ALIEN. Now that what a cool monster. But again, you didn’t see it for AGES!

Funnily enough, the scariest monsters for me are often the simplest. A few horror films stand out way above the others for me – HALLOWEEN, THE GRUDGE and THE RING. The last two are inspired by Japanese ghost stories and use almost no special effects, but they completely terrified me. Just that idea that you think you’re alone and then you catch a glimpse of someone’s foot hidden behind a door and you realise – oh no! - someone’s there!

HALLOWEEN was one of the first movies I saw where the bogey man simply wore a white mask. But masks are TERRIFYING – simply because you can’t see any human expression or eyes. DOCTOR WHO did a great episode called THE EMPTY CHILD which scared my own children to death even though the bogey man was just a kid! Why? Because the child in question wore a gas mask. It was seriously creepy!

It’s for this reason THE DEMON UNDERTAKER wears a spooky white mask. If you can’t see their face, hell, maybe they don’t have one! Just think how terrifying clowns are!