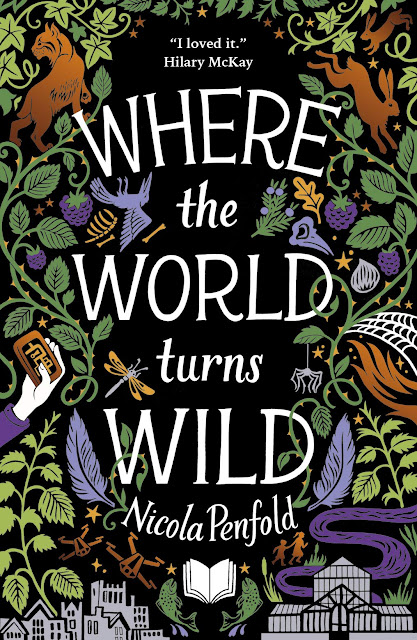 This month we have another fantastic and memorable read by debut author Nicola Penfold. Where The World Turns Wild was published on the 6th of February 2020 by Stripes Publishing. It's a topical book about HUMANS VERSUS NATURE which looks at climate change and human destruction to the planet. The book is set fifty years from now when the world is at breaking point. Nature is dying: plants, trees, animals, and birds are disappearing every day. However, the story takes a radical course of action by controlling the adult population. A group of people known as the Re-Wilders creates a deadly disease (carried by a population of ticks) that only affects humans which kills many of the population.

The story builds a fantastically thought-provoking read that will have you hooked. The walled city becomes the only place for humans to survive from catching the deadly disease. As you follow Juniper Green and her six-year-old brother (Bear cub) into a non-stop adventure, the story takes you outside the city walls, beyond the buffer zone and into the UNKNOWN. The story really picks up pace as you venture further into this wilderness in a heartfelt and beautifully crafted adventure. I really loved the relationship between the children and the lynx cat that was established. It was truly mesmerizing and really added a little something extra to the story.

The brilliant use of description sets you on a course of vivid colour. Flowers and animals come alive, whilst the sounds of swaying trees and snapping of twigs can be heard all around you. The story really packs a punch as it takes you to a fantastic backdrop of the natural landscape which is very reminiscent of the LAKE DISTRICT - a place of outstanding beauty even on a rainy day!

The storyline is fuelled full of danger and the unexpected which is very compelling. The book shares a special relationship between brother and sister which is full of warmth and tenderness. It expresses their love and loyalty to one another, but there's also a lot of naivety which makes it really engaging. As they are looking out for each other, they take on the biggest risk to find their parents. However, will they find them?  This is a well thought out story with many great ideas and moments. There is certainly a deep connection to the future which highlights the global harm we do to this planet every day.

The plotline breathes heavily to clear the air and atmosphere. Every in-breath is full of nature and human relationships, whilst the out-breath expels the danger and darkness. It's a great visual escape from one world to another that will touch the hearts of all. It'll leave you with a warm feeling even after the last page has been turned. This is an intelligent Family Adventure with a five-star heart. It is both heartily and fully recommended by Mr. Ripley.
Email Post
Labels: Action Adventure Book Review 2020 Ecological Family February 2020 Nature Nicola Penfold Science Stripes Publishing