Sean Beech The Ice Crown the Lords of the Moon 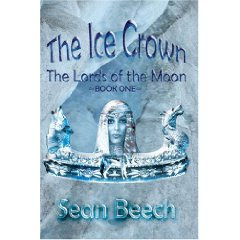 This book has to be a great collectible with a small print of 1000 hardbacks on a small book publisher.Book one was Published by Melrose in Sep 2008 with more books to follow in this series. This book is getting a great reputation as more people read it.A strong debut with a well written story also featured in a big news paper recently.

Sean, 38, wrote his fantasy adventure story The Ice Crown on Army notebooks while an army medic treating the injured and sick in Basra, Iraq.

He joined the Army at the tender age of 16. He recalled: “In between mortar attacks, I had a bit of downtime. It was escapism I needed to take my mind off the harrowing things in Basra.”

Now the married father-of-three has left the Queen Alexander Royal Nursing Corps, in the Light Infantry.

He is now training to become a primary school teacher and is donating half of the book’s profits to the National Literacy Trust.

The book, the first in The Lords of the Moon trilogy is aimed at teenagers.

Whilst serving in the Army Sean said he was saddened by the poor reading standards of many of the young soldiers and added he hoped his book may increase interest in reading for pleasure.

For nearly three hundred years now the Moon lands have known peace. But now suddenly not only has the Ice Crown of man been stolen, but also the Ancient howl of the Fennigan Wolves. But for what purpose? Their theft robs both races of the power to unite their peoples! But who is responsible? The mysterious Fey? The magical mages? Or their lands erstwhile enemy, the dreaded Dark Knights?

A book of darkness and light, of seriousness and laughter. Most authors would not even attempt to combine then two for fear of them becoming tangled up and diluting the power of the other. Sean Beech has achieved this brilliantly as he masterfully weaves the plot through seven characters. The entire 1st book seems to occur in only 3 days yet the action is intense as you switch from one character to the next and relive some of their pasts. The author is obviously setting the scene here for what promises to be an outstanding follow up and I for one cannot wait. I do not but into what people class as genre's of books; are not all books the fantasy of the author. What is the difference in making up a gruesome murder or an adventure at sea. I read books because of the author and if you like author's like Bernard Cornwell, Terry Pratchett, Dan Brown and JK Rowling to name just a few then you will love this. For me a new star has been born and one I will look out for.


I would like to have some feedback on this post.
By Mr Ripley's Enchanted Books on December 02, 2008