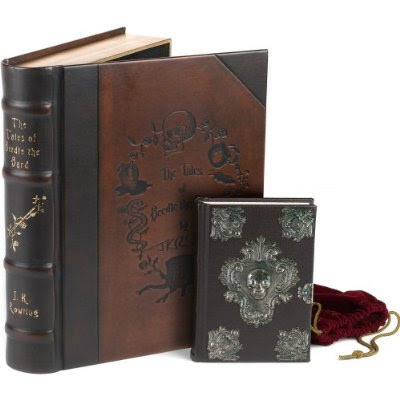 Thursday was an amazing day as the snow was falling and everywhere was in lock-down. Roads were blocked, schools were closed and if by magic the postman delivered some great treats. I rushed down the stairs to the postbox like a little child. I was looking forward to receiving my collector's copy of this great book and there it was alongside another parcel; my JK Rowling book and a fantastic new book proof of Paul Stewart's finale the Immortals with amazing embellishments by Chris Riddell. I hope to put a reveiw up soon. So thank you to everyone as I got my Christmas presents early.

JK Rowling's Collectors Edition of The Tales of Beedle The Bard from Amazon. Tucked in its own case disguised as a wizarding textbook found in the Hogwarts library, the Collector's Edition includes an exclusive reproduction of J.K. Rowling's handwritten introduction, as well as 10 additional illustrations not found in the Standard Edition or the original. Opening the case reveals a velvet bag embroidered with J.K. Rowling’s signature, in which sits the piece de resistance: your very own copy of The Tales of Beedle the Bard, complete with metal skull, corners, and clasp; replica gemstones; and emerald ribbon. As a special gift for fans, the Collector's edition also includes a set of 10 ready-for-framing prints of J.K. Rowling's illustrations, enclosed in a velvet-lined pocket in the lid of the outer case.This is a great edition for ever Potter Fan.


Five Magical short tales are a testament to J. K. Rowling's astounding imagination. After each one, Dumbledore writes his own analysis of the tale, and his personal experience of it ('The Fountain of Fair Fortune' has the funniest commentary). An introduction is penned by Rowling, and the original story is translated by Hermione Granger from the ancient runes they were originally written in (she is given credit, but she does not appear anywhere in the book writing as herself). At the end of the book are a few pages from the charity representative, explaining what the charity does.

Five out Five
By Mr Ripley's Enchanted Books on December 05, 2008