James Dashner - The 13th Reality - The Hunt For Dark Infinty 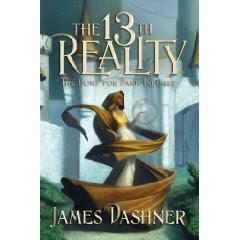 This is the second book to be released in the 13th Reality Series by James Dashner. The story takes on a new adventure with Tick, Paul and Sofia forced to "wink" from Reality to Reality. Solving riddles and overcoming fear and danger with every test is the main theme. Tick and friends are fighting for survival as they are tested to the limits in this sophisticated world involving 13 realities. Mr.Chu is working on a mysterious new weapon called the Dark Infinity to rule all the realities. But he requires someone to help control the weapon he has invented.
It's another great story told in such detail, which gives the reader a sense of being in the story. As you delve through the pages the dark and sinister tone and feel becomes more evident. There are lots of twists and turns, including some James Bond gadgets. As with all great endings, the climax culminates in lots of action, drawing all the loose ends into a tidy knot. Recommended to anyone who loves a great read with a big Science Fiction feel. Four out of Five.

Published in the U.S by Shadow Mountain

It s been a quiet summer for Tick, Paul, and Sofia, but the latest message from Master George changes everything. The Realities are in danger and from something more terrible than Mistress Jane and the mutated Chi karda of the Thirteenth Reality. People from all Realities are inexplicably going insane. Worse, some Realities are fragmenting, disintegrating into nothingness. Master George has learned that Mr. Chu from the Fourth Reality is working on a mysterious new weapon called Dark Infinity. But no one has any idea how to stop the weapon or even if it can be stopped. To make matters worse, Tick and his friends have been kidnapped, forced to wink from Reality to Reality, solving impossible riddles in order to survive the deadly traps surrounding them. Mistress Jane and Tick find themselves in a race to reach the weapon first but who will destroy it and who will become its master?

Trailer for the First book.