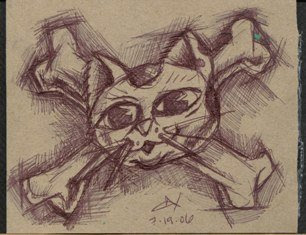 I am always looking ahead for great new books and I think this new series of books is something to keep your eye out for.

HarperCollins Children’s Books has bought INVISIBLE FIENDS, a debut series by B Hutchison. The six-book deal for world rights, including TV, film and merchandise, was concluded by Nick Lake, Commissioning Editor at HarperCollins, and Kathryn Ross at Fraser Ross Associates. Described as "Harry Potter meets Nightmare on Elm Street, it is "a fantastically original, darkly funny and shiver-inducing new horror series about what happens when 12-year-old Kyle’s imaginary friend from childhood comes back to life". The series is aimed at the 9+ age group, and the first book, Invisible Fiends: Mr Mumbles, is scheduled for publication in early 2010. HarperCollins will be showing early proofs at this year’s Bologna Book Fair.

Lake describes it as "one of those rare projects that combine a fresh premise, wonderfully accessible writing, and the sort of deft humour that makes the terrorsweats just about bearable. Anyone who likes laughing, or screaming, or preferably both at the same time, will love it."
Posted by Mr Ripley's Enchanted Books on February 05, 2009

Thanks very much - hope it lives up to expectations.

Thanks for leaving a comment.
I am Looking forward to reading the books at some point. I have a good feeling it wiil go down well at Bologna just like Derek Landy did
back in 2006.

I hope you're right! Skulduggery Pleasant and Invisible Fiends share the same editor, so fingers crossed...

So your in good hands then!

Not bad going on the second book.

I also love the Snow man how long did it take you all to make?

He took about an hour, but that included time spent in snowball fights and the ten minutes it took to find anything even vaguely resembling snowman arms.

Notice the eyebrows? They are the tiny, shrivelled wings of a dead bird we found.

That's a complete lie. They're bits of bark. Wings would have been better, though.

If a bit weird.

A book about crazy killer Snowmen sounds like great fodder for a book.

Do we have artwork for the cover of
"INVISABLE FIENDS"?

No cover artwork yet, but there's a top artist working on the designs as we speak. I did get a look at the cover for the proof copies that'll be going to Bologna, and the logo is looking pretty damn cool.

If it's artwork you seek, though, check out my blog, where you'll see page one of the comic book I'm currently developing.

Nice artwork is it a comic or graphic novel?

I have also put a link to your site,hope you don't mind.

Is the snowman on the loose. We have had alot more snow in Yorkshire today.

Actually we went back the next day to where we'd built Snowgor and he was gone. I assumed at the time that someone simply smashed him to bits, but maybe he just upped and went himself. Maybe he's out there somewhere. Watching. Waiting...

Thanks a lot for the link. It's much appreciated.

The artwork is from a 4 issue comic mini-series, which we'll hopefully collect as a graphic novel somewhere down the line. I can take no credit for the artwork - I can't draw to save my life.