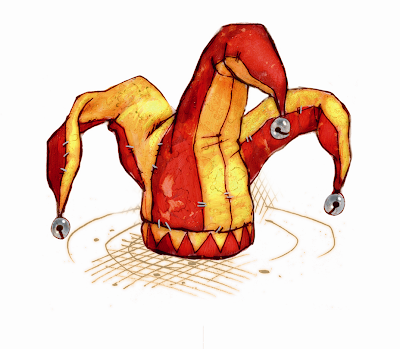 Back in 2006, when the first book was unearthed from the book fair in Bologna, I looked forward to reading this story. Such a great ray of emerging titles were born from Derek Landy's - Skulduggery Plesant and Joanne Harris' - Runemarks, all making their deals at the fair.
So now we are on book three in the adventures of Sebastian Darke.

It starts out with Sebastian, Max and Cornelius venturing off into the deepest depths of the jungle in search of the legendary lost city of Mendip. Philip has written another great adventure, building on the characters' relationships with each other. This is another magical story with great detail; very well written. It has lots of humour and laughter as Sebastian becomes a jester once more. As the book gathers pace, the story takes on a new twist and I found myself feeling sad as the story came to a climax.
Another great read from cover to cover with this on-going adventure which keeps getting better and better. Five out of Five and I'd like to thank Philip for getting a copy of this book sent out to me. Many thanks.


Sebastian, Max and Cornelius are off on their most hazardous adventure yet. Deep in the dense jungles of the south they are searching for the legendary lost city of Mendip when their quest is rudely interrupted by a savage attack by a band of Gograth - armoured apelike beasts. Rescued by jungle girl Keera, they are taken to the village of the Jilith, a primitive tribe of warriors, who are themselves locked in a grim struggle for survival with the Gograth. Sebastian's arrival has been foretold in an ancient prophesy which states that the elf-Lord and his two companions will rid the Jilith of the curse of the Gograth forever.And if Sebastian, Max and Cornelius can achieve this Keera herself will guide them to the Lost City. But first our heroic trio must brave savage battles, hazardous journeys, attacks by fierce beasts and some of the worst jokes in history. And what's more when they finally reach their destination, they have to contend with The Night Runners - the most terrifying foe they have ever encountered; a foe that simply cannot be killed ...because they are already dead.