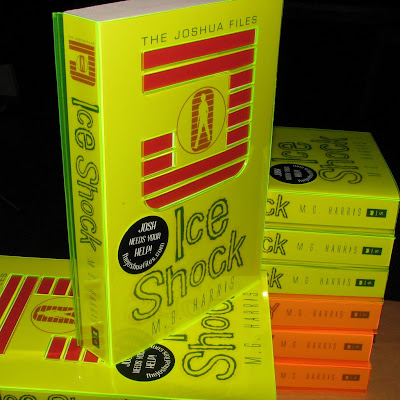 Mr Ripley's Review Thanks M.G for sending me the new Photo.

This is the second book written in the Joshua Files series entitled Ice Shock.
The story starts just a few months after Invisible City where we find Josh back home in Oxford. Josh embarks on another fast-paced adventure trying to find the answers to his father's death. Keeping with the Mayan Culture,the story revolves around the hidden city of EK Naab and the IX Codex which keeps the story moving. Josh makes a huge discovery first, then the story starts to take pace with a few twists and turns to keep the reader turning the pages quickly.
I love the way M.G Harris has the ability to write a great story, putting all the action you would normally find in an Alex Rider book. I enjoyed reading this book, as you feel a part of the story. Joshua's survival, again keeps you gripped throughout. A great joy to read, I'm already looking forward to the next book.

Five out of Five, great adventure with imaginative characters which fit the story well. Amazing detail, referring to the Mexico and Mayan cultures, making the story stand out. I also like the idea of putting Josh's blog into the book to make the story more stylistic.

Synopsis
Josh is back home, trying to resume his normal life and make sense of his Mayan adventures. But soon it becomes clear that being back in Oxford doesn't mean Josh can escape his destiny. He's evenmore certain now that his father's death was no accident -- and he's starting to wonder if he can really trust his closest allies. But when he finds out a shocking secret, that's when the real adventure begins...