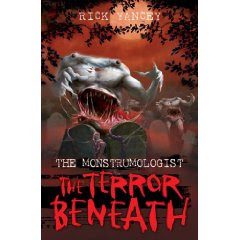 Some of the best paperback books for release in the normally quiet month October 2009.

A gruesome gothic-horror adventure about a monster-hunting scientist and his apprentice. Will Henry is an assistant to a doctor with a most unusual speciality: monster hunting! In the short time he has lived with the doctor, Will has grown used to late night callers and dangerous business. But when one visitor comes with the body of a young girl and the monster that was feeding on her, Will's world changes forever. The doctor has discovered a baby Anthropophagi - a headless monster that feeds through the mouthfuls of teeth in its chest - and it signals a growing number of Anthropophagi. Now, Will and the doctor must face the horror threatening to consume our world and find the rest of the monsters before it is too late...


Does my beak look wonky? Edgar's battered beak is nothing to crow about. He's so preoccupied that when Cudweed sees a guh..., a guh...You-Know-What, Edgar almosts forgets that he's the Guardian of Otherhand Castle. But the rumblings and wailing from the Lost South Wing can no longer be ignored. Lord Valevine is busy trying to save the family from destitution with his latest Gold-detecting-Gadget, so it's up to Solstice and Edgar to go ghost-hunting, and pit their wits against the obnoxious Captain Spookini.

In order to escape them, I must become one of them. We were so close. We had one last shot at freedom and we failed. This time the warden will show us no mercy. This time, our punishment is a death sentence. Only death won't come for us here, not in Furnace. It wouldn't dare. No, our fate is something much, much worse. Because in the bloodstained laboratories deep beneath the prison lies the horrific truth behind the warden's plans. Down here, monsters are made.

Well, Shabba Me whiskers! Mr Gum's back! But what's he up to this time? Oh, dreadful things my friends, dreadful things indeed. It seems he's found himself a brand new treat - rancid kebabs just dripping with dirty grey sauce. And he just can't get enough of them. He's gotta have more! More! Less! I mean, More! But not everyone's too happy about Mr Gum's new dinnertime arrangements and soon the town of Lamonic Bibber is gearing up for war. Can Polly and her friends save the town from being torn apart? Will Mr Gum's hunger ever be satisfied? And who on earth is Thora Gruntwinkle? All will be revealed when you read "What's For Dinner, Mr Gum?" You'll see a gingerbread man driving through London! You'll see an annoying little monkey driving everyone mad! You'll see Friday O'Leary falling asleep in a hedge! Yes, it's all there in glorious black and white, my friends. Except for the cover, which is in colour. It's Bonus.

In the final adventure of Nancy Farmer's acclaimed trilogy a malevolent spirit of a vengeful mermaid is wreaking havoc on Jack's village and it's up to him, the old Bard and Thorgril to confront and vanquish the restless draugr. But the task will not be easy and the three find themselves travelling once more with Thorgil's northman brother and his crew into the most dangerous of waters. Their quest to right old wrongs leads them from a village plagued by a hogboon to the fin folk land of Notland and via every danger in-between. Can they escape the perils they face and return in time to help undead spirit to find peace?
Posted by Mr Ripley's Enchanted Books on August 21, 2009