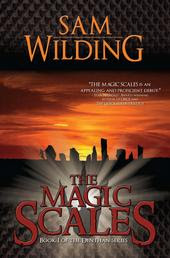 I've just had a nice Scottish week away to the gateway of the Highlands - the picturesque and once thriving fishing town of Oban, which now relies on the tourist trade. I only took one book on my hols and read that quite early on, so I went in search of a local book to read - keeping me in the Scottish spirit of the week. We found this book in the local section of the bookstore; I was hooked by the synopsis.
It's a great little tale - a fantasy adventure for the young and old. The book is laced with humour and action throughout.
The journey follows two boys, one asthmatic and the other highly talkative, plus a magical fish who used to be a wizard! I know it perhaps sounds a little unbelievable but it's not. They embark on a rollercoaster ride to the fantasy land of Denthan. It's a nice wee tale, incorporating lots of well written creatures, which have been developed from the author's great imagination.
The book reads really well; lots of action and split story segments which bring all the characters alive to great affect. The book also encompasses lots of Tolkien-like battles making it very memorable. The reader is thrown head-first into the adventure and in doing so the pages of the book fly by. This a well crafted debut book from a new writer. Book two is apparently also in the shops entitled "The Second Gateway" which I did not see - published in April 2009. I will give this book a good four out of five and will track down the next installment before book three is published.

James's father is missing. With no clue why his dad would run out on him and his mum, he hides out by an ancient stone circle to think. There, James discovers a dead stoat, crushed in an impossibly huge footprint. The mystery of what smashed the little animal leads James into finding Mendel, a wizard from another world called Denthan. Mendel has his own problems though. He's trapped in the body of a goldfish and Denthan's sun is about to die and destroy the planet. James is soon drawn into Mendel's plight and hopes against hope that the goldfish can somehow help him find his dad.

Will Denthan be saved? Can Mendel regain his true form? But more importantly, will James ever find his father?

Born in Helensburgh, Scotland, Sam grew up beside Loch Lomond on the edge of the Scottish Highlands.

He gained an honours degree in Zoology at Glasgow University and always maintained a strong interest in nature and the outdoors. He also became involved in songwriting and through the years played rock guitar in the UK, Holland and America.

Sam soon moved on from song writing to poerty, short stories and eventually on to his first novel, The Magic Scales, Book One of the Denthan Series, which he wrote in the early hours of the morning for his oldest son, Ryan.

Sam still lives and works in the Scottish Highlands and is currently working on Book Three of the Denthan Series.

Have to agree with all your comments. Loved this book and looking forward to the follow up. Thanks for the heads up!"

I am looking forward to reading the next book. I have had a look for it in Scotland but not found a copy. I did find some other good books from Scotish Authors.
I will do a post on the books I got from this area soon!

The second book in the Denthan series (The Second Gateway)is available on Amazon, but I picked a copy up in Wigtown, the book town. I was told by the shop owner that it was the biggest selling childrens/young adult book for them in the last 5 months. ps- I really enjoyed it. I got told off by my wife for laughing out loud in public. Like book one, some really great dialogue.

Thanks for the comment. I hope to pick up a copy soon! If you ever fancy doing a review for any kids book, send me an email and you can do some guest reviews for us. It's always great to read others opinions, rather than just mine!

From 'Another Big Kid'

I loved this book and the sequel. In my opinion there should be a whole series on cathy Peck; she is my fav.
Cant find this book in many shops, though.Perhaps Mr. Wilding needs a bigger publisher.
by the way, what's you opinion on local dialect in books?

I love the use of local dialect in books as it gives the reader a sense of place and allows the flavour of the heritage to be expressed.

What do you think?

Local dialect makes it more difficult but it's really worth getting into and rewarding in my opnion. I also liked the phonetic dialogue in Wilding's book.

are you going to review book 3 in the series?

Have to say no. I reviewed the first two books and felt they was no need to review the last book.

I am always happy to post another person's review of it on site.

After some great comments on the Mr Ripley site about the Denthan series, I dutifully searched out a copy of book one and book two. I was pleasantly surprised and excited by the wild settings, the crazy characters, and the old fashioned charm that oozed from the pages. Wilding has a pretty unique style, in my opinion, and has an obvious talent at weaving an intricate tale. Each thread is, in it’s own right, captivating and when they all converge, it is simply magic. I love his random theories, or should I say the wizard-goldfish, Mendel’s random theories, and I was truly shocked by the antics of characters like Cathy Peck, who comes into her own in this, the third section of the tale. Book three, Return to Denthan, is the best yet. The Tolkien-like battles and the Tom Sharpe-like humour really steal the show and the tragedy waiting at the end is truly unexpected and well written. To have giant pond skaters that tumble city walls and suck out the guts of dragons hints at a great imagination. I would be gutted if this were truly the end of James Peck’s adventures. Start at book one – The Magic Scales and read all 3 in the series in one sitting. I did this last weekend and found even more treasures along the way. A solid Five out of Five!