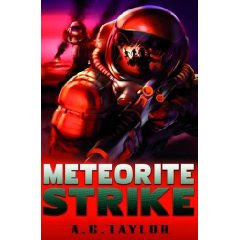 This is not the kind of book that you want to read whilst flying (as a passenger) in an aeroplane!

A brother and sister become newly reunited with their father, after their mother tragically became ill and finally died. They soon find themselves on the way to Australia, with their father, and at this point the story starts to unfold. The opening starts with a cliff-hanger of suspense - a plane (destination - Australia) hits the aftermath of a meteorite, at which point the action soon develops into gripping proportions.

I was pleasantly surprised by the plot structure; lots of action to keep the reader engaged and epic proportions of turbulence to keep the reader gripped. Whilst this story does have similar attributes to other books published at the moment, it is nevertheless a fantastic ride of enjoyment. The action parts of the book are particularly well written and actually leave many similar-style books standing. I felt there were many memorable scenarios within the book such as when the children had to fend for themselves against the evil-power hungry military task force HIDRA. When they discovered how to control and use the powers to gain freedom and found a vaccine to fight the virus - leaving its victims in a comatosed state.

This is a very accomplished book by a debut author, who was inspired to write from a flight across Australia, and I am glad he did. This book is a great read, it has a Sci-Fi edge with lots of cool superhero powers (demonstrated by the children). It finally ends with a dynamic crescendo .... a big battle which makes for an epic flourish.

The next book to look out for is 'Alien Storm' which will be published in November 2010.

This book gets four out of five I expect five of five in the next book!

Book Synopsis: Sarah and Robert are sure their number is up when their aeroplane crashes over the Australian desert. But this is no ordinary air disaster. A meteorite strike has impacted Earth, bringing with it a deadly alien disease. Thousands fall victim to the virus, falling into a deep coma. Luckily, Robert and Sarah appear to be unaffected - until they begin to exhibit some extraordinary psychic side-effects. This quickly makes them a target for HIDRA, a rogue international agency determined to experiment on them like lab rats in an attempt to control their superpowers. Before long, the children are captured in HIDRA's secret desert HQ, a prison for superhuman kids who can control fire, create storms and tear steel with their minds. This new generation of superheroes must join forces if they are to escape HIDRA. But what kind of world awaits them outside?