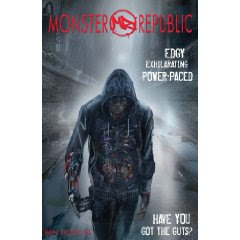 I am the monster and the monster shall be a hero. This tale may be the book you are looking for or it might not.

This is a new voice for 2010, from the author who's goal is to steal young peoples imaginations from the gaming world. The book is based on a manic Cyber romp of Sci-Fi mayhem in the world of a madman. Dr Fry is the evil character of the book, which sets out to make Frankenstein monsters out of children, in order to make an indestructible army of Superhuman soldiers . It's a fast paced action-packed book; the short chapters and great dialogue keep the book bouncing along. The book features some feisty encounters through various detailed battles, as Cameron comes to grip with many of his artificial enhancements.

Moral issues are tackled in the face of the truth and the belief in doing what's right. The book will appeal to many a reader and is a very exciting start to a new series. The next book has so much scope, it will be one of the many great books which I will be looking forward to.

The only negativity I have is with the ending, as I did find one aspect a little bit feeble. I will give this four out of five - a captivating read with many possibilities for the next one.

Book Published by Corgi in January 2010

Book synopsis
An explosion in a nuclear power plant. Kids patched up with scavenged body parts and bionic implants. A growing army of superhuman soldiers programmed for destruction. 'No', whispered Cameron to the monster in the glass. And he watched it shaking its hideous head. 'That's not me. You're not me'. As commercial and compelling as a computer game, this is the first book in a major new series.