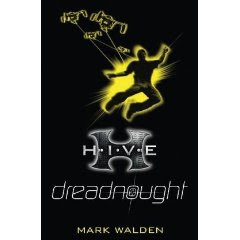 I loved this series of books, starting with the very first book I was given at the FCBG conference by a nice person from Bloomsbury. I have to say they are among some of my personal all time favourite reads. The story-lines within each book are packed full of action and take the reader on a whirlwind ride. These are the type of books reluctant boy readers will love and could encourage them to read more. I have not heard many people, who have read these, say a bad thing about any of them.


The books are centred around some great characters, who are part of a villainous group know as G.L.O.V.E (Global League Of Villainous Enterprises). The battle and scrapes they all get themselves into make for top quality reading, that keep the reader transfixed to the pages. The story and dialogue in all of the books are tight and engaging. The plots are clever and well constructed.


Mark Walden (before writing books) spent ten years producing video games and so has a good idea in knowing what entertains children - lots of action and great imagination, some cool and likable characters; with lots of bad guys. Another five out of five - I appear to be saving the best books to last this year.

Book Synopsis:
A renegade faction of the world's most powerful villains is intent on destroying G.L.O.V.E. (Global League Of Villainous Enterprises) and showing the world the true face of evil. The Disciples begin by hijacking Diabolus Darkdoom's Airborne command post, then they kidnap his son and his son's best friend. Unfortunately for them, Nigel Darkdoom (and Franz) also happen to be Otto's friends. Heading out to America, Otto, Wing et al embark on a perilous and highly unauthorised rescue operation. Cut off from the support of H.I.V.E. and on the run from American security forces the hunt for their friends leads to one of the US military's most secret facilities. It becomes clear that the Disciples are not all they appear and in a desperate race against time Otto must work out who his real friends are to prevent the Disciples from completing their true objective. Only Otto can save the world from domination by a sinister new world order but it might be that the price he has to pay is just too high. When it comes to the crunch will he be prepared to sacrifice himself?