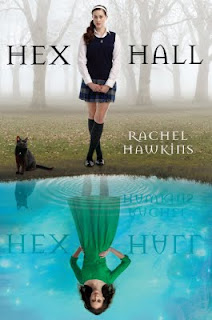 Are you a practicing Witch, Faerie or Vampire? Do you love a book that casts a spell on the reader? If you've answered yes to any of these questions, then this may well be the book for you. As a shapeshifter myself I like to morph into a good book and, I have to say I definitely found one here. The quicker I read a book, the greater the sign that I am enjoying it; this took less then five hours in one sitting!


The magical experience of all the characters was a joy to read. I loved the story and was extremely surprised about it, to tell the truth. You' ve no idea where the book is going to take you but it definitely has a blockbuster feel, as well as a feeling of being fresh and not like a book you may have read before.

The plot was particularly good and the relationships between the characters worked well. The angst and romantic nature was not too over the top; making it more appealing to both boys and girls.

The story is set around the shabby outward looking school of Hecate Hall. The reform school is for wayward 'Prodigium,' who have been attracting too much human attention.

This is going to be a real hit next year with readers; it's fun, witty and very uber-cool. It has great twists and turns with a climatic ending which will enhance the enthusiasm for the next book in the series. This is currently known as 'Hexy Times' but could be subject to change prior to publication.

I am going to give four out of five, as I need to know more about the history and the events which connect the story. A fine debut book and a great new series - one which I believe will catch the eye of film makers. The only downside to the book is its front cover, which I feel is not appealing enough for boys. I'd be interested to know whether other people feel the same.

Book published by Hyperion Books in the U.S  March 2010

Book Synopsis Three years ago, Sophie Mercer discovered that she was a witch. It's gotten her into a few scrapes. Her non-gifted mother has been as supportive as possible, consulting Sophie's estranged father--an elusive European warlock--only when necessary. But when Sophie attracts too much human attention for a prom-night spell gone horribly wrong, it's her dad who decides her punishment: exile to Hex Hall, an isolated reform school for wayward Prodigium, a.k.a. witches, faeries, and shapeshifters.

By the end of her first day among fellow freak-teens, Sophie has quite a scorecard: three powerful enemies who look like supermodels, a futile crush on a gorgeous warlock, a creepy tagalong ghost, and a new roommate who happens to be the most hated person and only vampire on campus. Worse, Sophie soon learns that a mysterious predator has been attacking students, and her only friend is the number-one suspect.
As a series of blood-curdling mysteries starts to converge, Sophie prepares for the biggest threat of all: an ancient secret society determined to destroy all Prodigium, especially her.