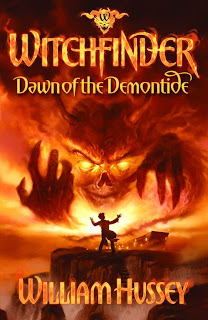 The smell of the Demontide is upon us (the reader), the anticipation is strong as the writer drags us down to a living hell. The swirl of poisonous frogs and green mist encompass the reader and then toss them back down with a horrifying thud. Witches, Demons and blood sacrifices are themes that are accounted for in this book, which is disturbing and certainly keeps everyone on edge.

We may have a new master of 'Dark Fiction' for 2010 - the book spooks all our living senses and sets us on a tale of terror but with a fantastic plot intertwined throughout. The book has a slow start but gains momentum as the mysteries of Hobarron and its character's are delved into. I love the feel of this book including the ending.

This series of books will go down well with the evil and darker happenings of other great children's book writers, this will be the genre for 2010 as lots of interesting books are to be published next year. So much more to come, I think.


Book Synopsis
The first in a terrifying trilogy, read on if you dare: Jake could now see the demon fully. Its body was a mass of steely sinew, its arms roped with muscle. Six fingers sprouted from its hands, each ending in lethal talons. The thing did not possess a nose; instead a large hole, bubbling with green mucus, occupied the middle of its face. Mr Pinch's tongue flickered between his teeth and slurped across his fat lips. He was hungry. When a violent storm rages around the little village of Hobarron's Hollow, a young boy is sacrificed 'for the greater good'. His blood is used to seal a mystical doorway and prevent an apocalyptic disaster known only as the Demontide. Twenty-five years later, another boy, Jake Harker, is about to be drawn into the nightmare of the Demontide. Witches and their demon familiars stalk his every move, and his dreams are plagued by visions of a 17th Century figure known only as the Witchfinder. When his father is abducted, Jake must face the terrible secrets kept by those closest to him and a shocking truth that will change his life forever . . .