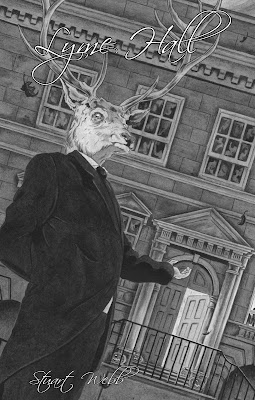 Book Review
Before I became an avid reader, I just collected books and very rarely read them. Instead they sat on dusty shelves, calling out to be loved and read, however they were rarely looked at.

Then I started reading an eclectic mix of articles in a publication called the "Book and Magazine Collector". Stuart, who is the author of this book, had a writing column which I really loved. He would on a monthly basis write about new 'up and coming' authors, as well as collectible books to look out for - I really miss reading his articles.

Anyway this is the second book that Stuart Webb has written, the first being "Aurora's Tears," which sold out as soon as it was published. The question has to be asked, did it fall into the hands of the book collectors or book readers, and will his second book follow likewise? On this occasion, I would like it to fall into the hands of the readers who will cherish it, due to its fantastic content and not monetary value.

I must admit, I wasn't sure what to expect from this book, and had no idea that I would end up enjoying it so much. The book has lots of charm and character that I instantly fell for, from the very first page to the last, as it is beautifully written with lots of great detail. It's a story that leaves you feeling it was well worth the journey that you take as a reader.

Rose is happy with her life: an expensive house in the city, loving parents and a best friend she can trust. She wants for nothing and lives life to the full. Then, without warning, her perfect world is torn in two. Forced to move to a country house she hates with a father she no longer understands, Rose is lost and alone. And when she begins to hear things that aren't there, see things that can't be real, her father doesn't want to know; all he cares about are the deer that are disappearing from the estate. Maybe, just maybe, if she can solve the mysteries herself, she can finally make him listen.

It's a classic ghost story with mystery that is wrapped up in Lyme Hall. Its past is both intriguing and captivating with notes of sadness, but when you get to the end it finishes on an upbeat tone. Stuart has drawn on lots of emotions including everyday issues such as bullying, bereavement - from the loss of a parent and difficult family circumstances, which gives depth to the story.

I love the part when William shows Rose around Lyme Hall, explaining the associated detailed history and folklore, as part of the tour around the great house. The unique characters are well written, they have roles which develop extensively through the story to create an interesting plot.


So the only thing I can really say is that this book needs to be read. I can highly recommend it, you will not be disappointed, so grab a copy (once it is published) but before they sell out. I have a feeling that this book may have a small print run and will disappear very speedily.