New Children's Book - Picks For The Month Of March 2010 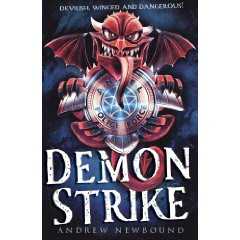 We have lots of great and varied reads to offer in the month of March, there is a good selection of  interesting books. There are some particularly strong titles being published by Chicken House and Hodder Children's within this month. Interestingly, all the books mentioned are being published in paperback and no hardbacks - this is a first. I hope you manage to find a few books that entice you to read them. Love to hear any comments you may have. Thanks and enjoy.


Andrew Newbound - Demon Strike - Published By Chicken House - 1 March - (Book Pick)
Book Synopsis:
Demons from the Dark Dimension pour through a portal in the wall of Pittingham Manor, the mid-point for an attack on high. They're planning an assault. Into this chaos stumbles 12-year-old ghostbusting psychic Alannah Malarra and burglar Worley Flint. Up until now they've only ever faced tame treasure-hording ghosts, but this is something else. Their only hope is a plucky angel police patrol on a routine earth-monitoring mission. Enter Inspectre Flhi Swift and officers Yell and Gloom 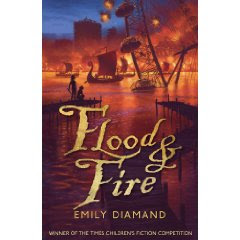 Emily Diamand - Flood and Fire - Published By Chicken House -  1 March
Book Synopsis:
Flooded England, 2216 - Lilly Melkun has outwitted the bloodthirsty Reavers, who prowl the waters that cover most of England - and escaped to Cambridge. But Lilly is far from safe, because stil in her keeping is PSAI, the last hand-held computer in existence - a now malfunctioning treasure from the past. Inside the jewellike computer, is a sinister looking chip with an unknown purpose. Worse follows, when the professors of Cambridge plug it into an ancient mainframe computer setting in motion a fiery chain of events. 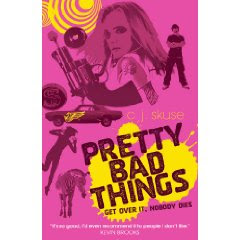 C.J Skuse - Pretty Bad Things - Published By Chicken House - 1 March
Book Synopsis:
SIXTEEN-YEAR OLD TWINS IN CANDY-STORE CRIME SPREE Twins, Paisley and Beau Argent are in the headlines again. Last time, they were the 'wonder twins', when as six-year-olds they were found alive in woods after three days missing following their mother's death - three days spent looking for their dad. Now at sixteen, life's not so wonderful. Out-cast and exploited by their money-grabbing grandmother they're still clueless about their dad's whereabouts. Until they discover an old letter from him. That's when they decide to hit the road - and make headlines again. Holding up fast-food joints might seem extreme but if they can get on the news, and tell their dad they need him, they might get the dream reunion they thought could happen. 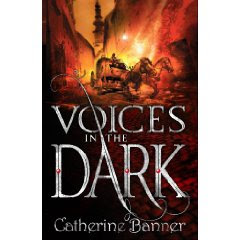 Catherine Banner - Voices in the Dark - Published By Corgi Children's - 4 March
Book Synopsis:
Anselm Andros has always thought he had a normal life - confidante to his mother, Maria, confessor to his stepfather, Leo, a man haunted by the secrets of his past, and support to his sister Jasmine. But when the political landscape of Malonia starts to shift, this unassuming family begin to unravel. Even though they have spent the past fifteen years leading a quiet life, Maria and Leo's actions are forever linked to the turbulent history of Malonia and its parallel world, modern-day England. The voices from the past still echo in the present and Anselm must pull all the pieces together - whatever the cost. 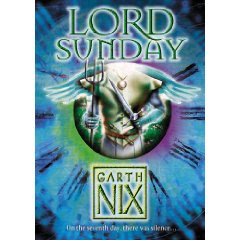 Garth Nix - Lord Sunday( The Keys to the Kingdom) - Published By HarperCollins - 4 March
Book Synopsis:
In this seventh and last book of THE KEYS TO THE KINGDOM, the mysteries of the House, the Architect, the Trustees, the Keys and the Will are revealed, and the fate of Arthur, our Earth, and the entire Universe is finally decided. Arthur has wrested the Sixth Key from Superior Saturday, but has fallen from the Incomparable Gardens; fallen not to the Upper House but to somewhere completely unexpected. Alone in enemy territory, as his mind and body are further transformed by the power of the Keys, Arthur must struggle with himself as much as with his many enemies. Meanwhile, Arthur's friend Suzy Blue plots an escape from her prison in Saturday's tower, as battle rages above and below. Saturday's elite force is pressing on into the Incomparable Gardens, while her massed sorcerers fight a desperate rear-guard action against the Piper and his Newnith army. On earth, Leaf has to cope with the aftermath of a nuclear strike. Responsible for all the Sleepers in Friday's private hospital, she needs all the help she can get, particularly as Leaf herself has become a target for intruders from the House. And the tide of Nothing continues to rise, destroying everything in its path ... 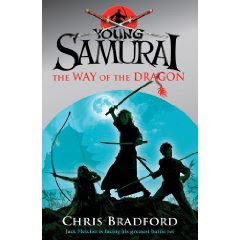 Chris Bradford - The Way of the Dragon(Young Samurai) - Published By Puffin - 4 March
Book Synopsis:
June 1613. Japan is threatened with war and Jack is facing his greatest battle yet. Samurai are taking sides and, as the blood begins to flow, Jack’s warrior training is put to the ultimate test. His survival – and that of his friends – depends upon him mastering the Two Heavens, the secret sword technique of the legendary samurai Masamoto Takeshi. But first Jack must recover his father’s prize possession from the deadly ninja Dragon Eye. Can Jack defeat his ruthless enemy? Or will the ninja complete his mission to kill the young samurai . . . 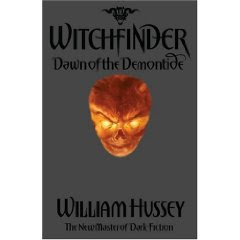 William Hussey - Witchfinder:Dawn of the Demontide -(Witchfinders) - Published By OUP - 4 March
Book Synopsis - See Book Review
The first in a terrifying trilogy, read on if you dare: Jake could now see the demon fully. Its body was a mass of steely sinew, its arms roped with muscle. Six fingers sprouted from its hands, each ending in lethal talons. The thing did not possess a nose; instead a large hole, bubbling with green mucus, occupied the middle of its face. Mr Pinch's tongue flickered between his teeth and slurped across his fat lips. He was hungry. When a violent storm rages around the little village of Hobarron's Hollow, a young boy is sacrificed 'for the greater good'. His blood is used to seal a mystical doorway and prevent an apocalyptic disaster known only as the Demontide. Twenty-five years later, another boy, Jake Harker, is about to be drawn into the nightmare of the Demontide. Witches and their demon familiars stalk his every move, and his dreams are plagued by visions of a 17th Century figure known only as the Witchfinder. When his father is abducted, Jake must face the terrible secrets kept by those closest to him and a shocking truth that will change his life
forever . . . 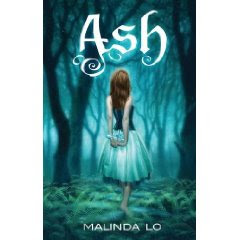 Malinda Lo - Ash -  Published By Hodder Children's Books - 4 March  -  (Book Pick)
Book Synopsis:
In the world of , fairies are an older race of people who walk the line between life and death, reality and magic. As orphaned Ash grows up, a servant in her stepmother’s home, she begans to realise that her beloved mother, Elinor was very much in tune with these underworld folk, and that she herself has the power to see them too. Against the sheer misery of her stepmother's cruelty, greed and ambition in preparing her two charrmless daughters for presentation at court, and hopefully Royal or aristocratic marriage, Ash  befriends one of these fairies–a mysterious, handsome man–who grants her wishes and restores hope to Ash's existence, even though she knows there will be a price to pay. But most important of all, she also meets Kaisa, a huntress employed by the king, and it is Kaisa who truly awakens Ash’s desires for both love and self-respect...Ash escapes a life with her grim and self-serving stepmother and finds her beloved one...
is a fairy tale about possibility and recognizing the opportunities for change. From the deepest grief comes the chance for transformation. 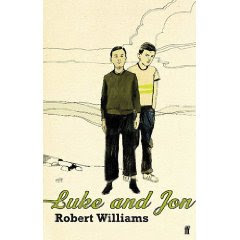 Robert Williams - Luke and John - Published By Faber and Faber - 18 March
Book Synopsis:
Luke's mum is dead. He finds himself in a small, scruffy northern hill town, with a near silent father, who he fears might be trying to drink himself to death. Then he meets Jon. Jon is massively strange. He wears 1950s clothes, has a side-parting and a twitch. The kids at school call him 'Slackjaw'. When Luke discovers his secret, Jon changes his life in more ways than he can imagine. Luke and Jon is a coming of age novel about family, bereavement and how lives can change forever in a single second. Written with great power, warmth and humour, it signals a hugely engaging and original new voice. Compelling and emotionally acute, it is a unique debut. 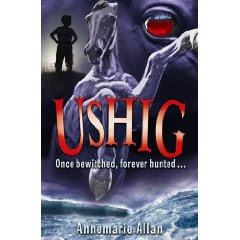 Annemarie Allan - Ushig - Published By Floris Books - 25 March
Book Synopsis:
Ellen whistled again and repeated the old rhyme Aunt Marian had taught her. 'I call you once. I call you twice. I call you three times over'. Surely in a place as beautiful as this, anything that answered her call was bound to be friendly. While exploring a small loch above the village of Aldhammer with her brother Davie, Ellen repeats a childish rhyme to call something to her. What arrives is an ancient being with the ability to shapeshift and the power to destroy. Ushig is a kelpie, a water wraith, and his intentions are anything but pure. Dragged into a dark, parallel world, inhabited by the creatures of Scottish legend, Ellen must pitch her wits against primeval magic. Can she outsmart the predatory Queen of the Night? And what does Ushig stand to gain? Another unique and gripping tale from Annemarie Allan, presenting an innovative spin on characters from Scottish folklore in a very modern manner. If you thought you knew the story of the kelpie - think again!
Posted by Mr Ripley's Enchanted Books on February 04, 2010