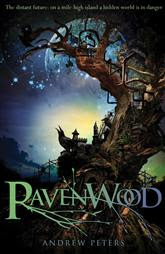 Every year I say to myself that I would like to go to the Bologna book fair. But every year I never get there - hopefully one day I'll eventually make it.


This is the fair where most of the more exciting books get brought to the attention of various publishing companies. Some of the best children's books pass through Bologna and for the lucky few, their rights can be sold all over the world. Last year my Bologna post was based on new talent Barry Hutchison, and his new "Invisible Fiends" series, which was exhibited at the book fair and made a lasting impression last year.


This year I am going to highlight an epic debut fantasy novel called "Ravenwood", written by new talent Andrew Peters.
The book will be published by Chicken House in the U.K in May 2011, but will be first exhibited at the Bologna fair where the rights will be offered.


This is a little snippet of the book, however it may be subject to change before it is published. Hope you enjoy this exciting adventure and want to read it soon!


The arrow flew over his shoulder and thudded straight into a wooden post. Too close! If he hadn’t stumbled, the shaft would now be buried somewhere near his heart.  He imagined the blood blooming like a flower across his shirt, his body tripping over the edge of the branch to fall, lifeless to the earth - a mile below.
Ark was exhausted. Sweat coursed down his back and his calf muscles ached.  He flicked his head round: they were only a couple of hundred yards behind. This part of the high-way was wide and straight. Not only had the original, huge branch been carved flat, like all the smaller branch-roads, but it had also been extended widthways with beams and scaffolding. Now it was twenty feet across at the passing places. At this time of the afternoon, before brush-hour, the way was deserted - not that any bystander would mess with this lot.
Somewhere hidden up above, dark clouds squeezed out their downpour, filling the forest with echoing drips. Ark ran for his life though a mass of shifting shadows, the splash of his footsteps giving him away.
The guard paused, wiping rain from his eyes, taking careful aim for another shot. The boy’s drenched clothes were like a painted target; every item from the brown leather skullcap and grotty tanned jerkin, to the tight britches and worn stockings that had seen better days, screamed out ‘plumber’s apprentice’.
The rubber-soled creepers on the boy’s feet were standard wear this high up. No-one wanted to slip off the edge, especially in this weather. But the guard shuddered at the thought of what those shoes had trod in. In fact, his prey resembled one big, turdy stain, a brown blot on the treescape. As for killing a fourteen year old? It wasn’t a problem but the solution.
Straight ahead, the high-way ran towards a huge, hollow tree trunk. Ark bolted into the centre and hesitated, catching his breath. The dead tree was a crossroads. Its massive trunk supported the junction with branch lines leading off in three directions through carved archways. In a dark corner, ancient, moss-covered steps led down into the hollow depths. He was desperate, but going earthwards? He shuddered even to think of it. Which way?
By Mr Ripley's Enchanted Books on March 20, 2010

Phwoar! What a cover! So beautiful, and it sounds great from the extract too. I definitely wouldn't be able to walk past that one in a bookshop without it turning my head.