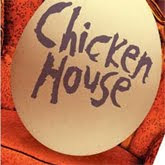 Janet Foxley has won the prestigious Times/Chicken House Children's Fiction Award, beating off four other budding unpublished authors.
The other books in the shortlist were:
Miles Cain - A Song For Nick Moon;
Ash Walker - Hair;
Chris Hill - Lucky Albion;
Bea Davenport - The Serpent House.
These are all worthy entries; it would be good to see them all in print very soon.
Congratulations to Janet, I will be looking forward to reading the published book shortly.


I have posted a small excerpt from the winning entry to whet the taste buds in anticipation of the forthcoming release - sometime next year, I think. I would really like to hear your views.


The only light in the Troggs’ home came from Ma’s fire. Now it threw the shadow of a larger-than-life Gritt on to the rocky wall, with a much-too-small Muncle dangling helplessly from his hand.

‘Ma!’ Muncle yelled again. His shadow swung wildly to and fro.
This sort of thing made him feel smaller than ever. At twelve he should have been able to stand up for himself. But at the moment he couldn’t stand up at all. Gritt had him firmly by the ankles. It wouldn’t have been so bad if Gritt had been his older brother, but Gritt was four years younger.
‘Ma!’ He was going to be sick if he stayed upside down much longer. It was a good thing Pa wasn’t home yet. Pa always took Gritt’s side. Gritt was the sort of son a giant could be proud of.
Ma Trogg peered through the cloud of steam above her cauldron. She was a handsome woman with an enviable number of bristly warts, but her broad yellow smile was too often clouded by an anxious frown. It was all wrong that she still had to worry about her eldest child when she had two younger ones to look after. But she would always worry unless Muncle could find some way of fitting into a world where he so obviously didn’t fit. And time was running out. In three days he would be leaving school. If he couldn’t find a job he was capable of doing by then, his prospects were bleak.
‘Gritt!’ roared Ma. ‘Put your brother down at once.’
‘But you told me to play with him till breakfast.’
‘I didn’t mean you should use him as a toy.’
‘Oh. All right.’ Gritt dropped Muncle as quickly as he’d picked him up.
Muncle’s smallness did give him one advantage: he was unusually agile. The moment Gritt let go, Muncle somersaulted in mid air, landing on his bottom rather than his head. It still hurt. Where every other giant had rolls of comfortable fat, Muncle had only skin and bone.
He wasn’t bad looking. He had an excellent complexion: coarse grey skin dotted with sparse hairy warts. He had Pa’s bushy eyebrows and fleshy nose. He had Ma’s bulging eyes and uneven teeth. It was just Muncle’s size that was wrong.
‘We can’t wait for your pa any longer,’ said Ma. ‘Come and eat, both of you.’
She unstrapped the wicker baby-basket from her back and set it down beside the table. Flubb grabbed her leather bottle and glugged the fungus porridge down eagerly.
Posted by Mr Ripley's Enchanted Books on March 21, 2010

I read this book in its very early stages, and I can tell you it's got even better since and is going to be good! I'm so thrilled for Janet.