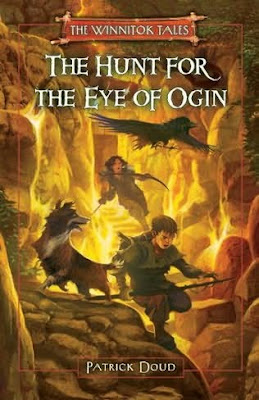 Patrick Doud's "The Hunt for the Eye of Ogin" (The Winnitok Tales) is the author's first fantasy novel. Set in the land of talking creatures it follows the path of Elwood Pitch, a thirteen year old boy, who he is carried away to the land of Winnitok, in the otherworld of Ehm. Desperate to find a way back home to his family, Elwood's one hope is Granashon, the land's immortal protector. But Granashon is missing, and the power that protects Winnitok is fading fast.
When Elwood dreams of the Eye of Ogin, a legendary object with the power to see Granashon wherever she might be, he vows to find it. With his dog Slukee and two newfound companions, Drallah Wehr of Winnitok and her talking raven Booj, Elwood sets out on an epic quest.
I have been reading this book in segments, due to a busy week, but every time I left the story it stayed with me until the next time I picked up the book. It is well written for a debut book - the action adventure part is particularly good and some poetic moments thrown in too. The book has a slow build-up and could have done with a little more detail being developed on some of the lead characters. However the story is still a magical ride, with many battles and scrapes along the way. The book has an amazing plot which develops into a great ending. A classic family adventure for every one to read and enjoy.
I am really looking forward to the next book in the series entitled "The Mornith War" which will be published some time in spring 2011 by North Atlantic books in the U.S.
About the next book.
Three years and many adventures after the events of The Hunt for the Eye of  companions Elwood, Slukee, Drallah, and Booj are charged with a task beyond Winnitok’s northern edge. Arriving in the community of a charismatic prophet, they find that Granashon the Nohar has been attempting to settle a conflict between the prophet’s followers and a proud clan of wolf truans. But this threat to peace is overshadowed by another, as an unnatural scourge of spirits is burning the prophet’s fields with a ghostly green fire.
Email Post
Labels: Action Adventure Fantasy lost Monsters