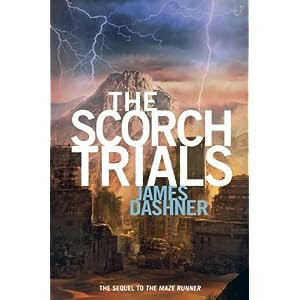 James Dashner - The Scorch Trials (The Maze Runner Trilogy) - Published by Delacorte Books  - 12 October 2010
Solving the Maze was supposed to be the end. No more puzzles. No more variables. And no more running. Thomas was sure that escape meant he and the Gladers would get their lives back. But no one really knew what sort of life they were going back to.
In the Maze, life was easy. They had food, and shelter, and safety . . . until Teresa triggered the end. In the world outside the Maze, however, the end was triggered long ago.
Burned by sun flares and baked by a new, brutal climate, the earth is a wasteland. Government has disintegrated—and with it, order—and now Cranks, people covered in festering wounds and driven to murderous insanity by the infectious disease known as the Flare, roam the crumbling cities hunting for their next victim . . . and meal.
The Gladers are far from finished with running. Instead of freedom, they find themselves faced with another trial. They must cross the Scorch, the most burned-out section of the world, and arrive at a safe haven in two weeks. And WICKED has made sure to adjust the variables and stack the odds against them.
Thomas can only wonder—does he hold the secret of freedom somewhere in his mind? Or will he forever be at the mercy of WICKED? 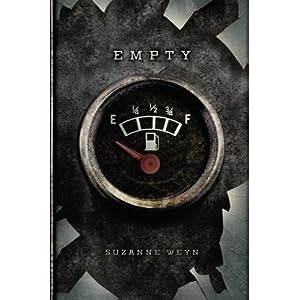 Suzanne Weyn - Empty - Published by Scholastic Press -  1 October 2010
It's the near future - the very near future - and the fossil fuels are running out. No gas. No oil. Which means no driving. No heat. Supermarkets are empty. Malls have shut down. Life has just become more local than we ever knew it could be.
Nobody expected the end to come this fast. And in the small town of Spring Valley, decisions that once seemed easy are quickly becoming matters of life and death. There is hope - there has to be hope - just there are also sacrifices that need to be made, and a whole society that needs to be rethought.
Teens like Nicki, Tom, and Leila may find what they need to survive. But their lives are never going to be the same again. 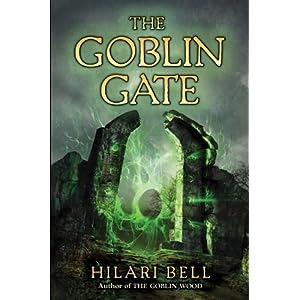 Hilari Bell - The Goblin Gate - Published by HarperTeen - 12 October 2010
Jeriah's brother, Tobin, is in terrible danger.
He's willingly crossed over to the Otherworld with a hedgewitch named Makenna and her legion of goblins. What Tobin doesn’t know is that the Otherworld is a perilous dimension that leeches magic from those who have it—and life from those who don’t. In order to save his brother, Jeriah must find a way to open a mystical gate between the worlds.
Searching for the key to rescue Tobin from the clutches of the Otherworld, Jeriah is thrust into a tangled web of political intrigue as he uncovers a dangerous secret that could change the fate of an entire kingdom. Now he must get help from the very beings he’s been taught to hate—the mischievous goblins. Meanwhile, the clock is ticking for Tobin. . . .
Hilari Bell’s enthralling fantasy adventure tests the bonds of magic, love, and loyalty in an unforgettable follow-up to The Goblin Wood that will leave readers breathless as they race to find out what high-stakes consequences await its hero. 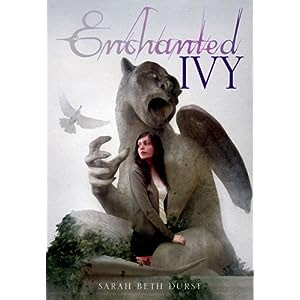 Sarah Beth Durst - Enchanted Ivy - Published by Margaret K McElderry - 12 October 2010
What Lily Carter wants most in the world is to attend Princeton University just like her grandfather. When she finally visits the campus, Grandpa surprises her: She has been selected to take the top-secret Legacy Test. Passing means automatic acceptance to Princeton. Sweet!Lily's test is to find the Ivy Key. But what is she looking for? Where does she start? As she searches, Lily is joined by Tye, a cute college boy with orange and black hair who says he's her guard. That's weird. But things get seriously strange when a gargoyle talks to her. He tells her that there are two Princetons—the ordinary one and a magical one—and the Key opens the gate between them. But there are more secrets that surround Lily. Worse secrets.

When Lily enters the magical Princeton, she uncovers old betrayals and new dangers, and a chance at her dream becomes a fight for her life. Soon Lily is caught in a power struggle between two worlds, with her family at its center. In a place where Knights slay monsters, boys are were-tigers, and dragons might be out for blood, Lily will need all of her ingenuity and courage—and a little magic—to unite the worlds and unlock the secrets of her past and her future.
A dreamwalker who has lost her way. A shape shifter who fears his own dark power. A fire herd punished for his magic. Can these three teens keep the human world of Noor and the magical world of Oth from splitting apart? 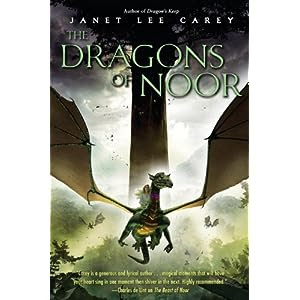 Janet Lee Carey - The Dragons of Noor - Published by EgmontUSA - 12 October 2010
The ancient trees of Noor are dying. If the blight kills the last azure trees whose deep roots bind the worlds, the bridge between Noor and Oth will split apart forever. Already as Hanna, Miles, and Taunier sail to the source of the blight, the rent between the worlds is widening, and magic is going out of Noor. The quest deepens when a strange wind blows across Noor stealing young children, and Hanna is powerless to protect her younger brother from the stealing wind. The Three journey east to the azure forests of Jarrosh. East to the dragon lands. East to the place where the wind-stolen children were taken. In Jarrosh, among dragons, the Three will be challenged to discover their hidden powers. Each of them must break beyond the boundaries of self to discover the ancient magic joining all to all.
By Mr Ripley's Enchanted Books on September 22, 2010

Oh my gosh - all of these look amazing! I want all of them. Now. Please?

Thanks for sniffing these out! 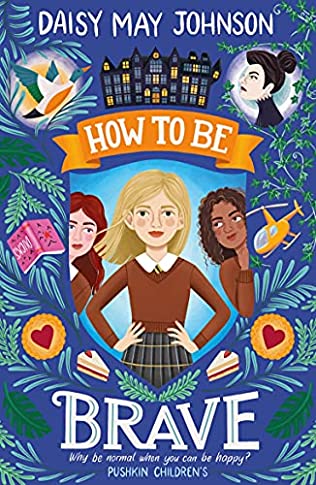