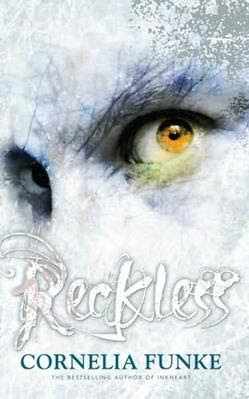 Welcome to Cornelia Funke's blog tour for the release of Reckless in paperback. Having read this book nearly a year ago, I would suggest that if you haven't already read this book then you should certainly put it on your summer booklist. To find out more then why not view my book review . . . . .

I would like to send a big thank you to Cornelia for finding time to write this post and to Tina at Chicken House for arranging this event. I hope you enjoy reading about and finding out more about Jacob Reckless.
A RECKLESS HERO:
Who is Jacob Reckless?
Well, I guess first of all Jacob would say that it’s a stupid question and next, that it’s nobody’s business.
But – as I irritate him anyway by sending him off on impossible and sometimes lethal adventures – I will nevertheless try the answer.
Jacob is what I often wish I could be (and I guess that’s true of most of us). He doesn’t think too much, he acts. He is completely fearless (with some exceptions that surprise him as much as they surprised me). He is quite selfish and not very responsible. In fact, he manages to run away from responsibilities and duties quite successfully most of the time, which gives him a freedom we all, from time to time, desire. But Jacob is less selfish than he thinks he is. He is actually the friend you’d like to have by your side when you’re meeting a ruthless Goyle or man-eating witches. Jacob will save you … while pretending he is terribly annoyed that he had to.
He is a hero who doesn’t give a damn about being a hero. Jacob is not interested in medals. He only fights for his own cause or for a friend or brother. He is not very interested in money and is definitely not interested in power – which is something I like about him very much. I hope he’ll get better at considering the consequences of his actions though. He has found some powerful treasures and not thought enough about what the people he has sold them to will use them for.
I sometimes wish that he would use all that strength and courage for a better cause but, on the other hand, we all know how difficult it is to decide what that better cause should be. Nevertheless…  he may have to start thinking a bit more – oh, I see him frowning! Yes, Jacob, I still know more about your story than you do 
So… Heroes… What is a hero anyway? Someone who does something truly unselfish and risks his own wellbeing to help or rescue others? Yes… but, quite often, heroes are used by those in power to achieve goals that don’t deserve their heroism. In our world I believe the greatest heroes are often those without the guns. It takes far more courage to fight the darkness of our world without the comforting reassurance of a weapon. But because we know that, and because we wish we could erase evil with a bullet, we sometimes love to slip inside the skin of someone like Jacob who doesn’t even think about good or evil, who doesn’t even try to save the world but suddenly finds himself doing it anyway. And has fun doing it!
By Mr Ripley's Enchanted Books on June 30, 2011