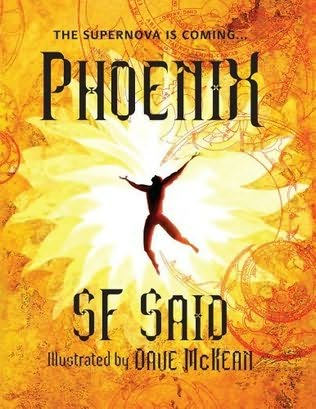 One boy alone . . . . . . can he save the galaxy?
I did not think that it would happen, but just like the brightest light from the furthest star, this book is a creation to behold. Seven years in the making, and the third fantasy adventure from the super talented SF Said, this is one of his creations best yet. It is a breathtaking epic space adventure that will have you gripped in so many ways. It's a pleasure to read and one that I would definitely read again....
Initially this book really caught me by surprise. I knew nothing about it until it came through the post, which was a feat in itself, as it arrived with only the postcode and my name on the parcel! The front cover has an attractive bright yellow image which stands out from the crowd. If you particularly enjoy a good Sci-fi space fantasy then this book is for you - it has certainly rocketed to the top of my favourite reads this year. Even if you wouldn't normally enjoy this genre, I would still recommend that you try this book as it really is that good.

The opening of this book presents a strong gravitational pull. The words run through your brain like poetry, whilst your eyes trickle over the amazing images from Dave McKean. These are a feast for the eyes and the brain - both the unimaginable and the impossible have been captured expertly in swirls of organic motion. The illustrations are depicted in black and white, whilst particularly hard to describe, they are very atmospheric and particularly captivating. This book is a must for seeing and reading; it is very creative and unique.

From the word go, you will be gripped by both the words and the images - both of which make a captivating story that will stay with you until the very last page. It has everything that is required (and more) such as amazingly imaginative settings and plenty of compelling action - both of which are written particularly well. The main character, Lucky, is very likable and actually felt like a real person. He appears as a very believable and down-to-earth person. Lucky is a human boy, but life soon becomes very complicated when, one night, he dreams that the stars are singing. On awakening, he finds an uncontrollable power rising inside him. . . . .

On the run with his unlikely Alien friends, the adventure takes the reader on a galactic mission. Lucky finds himself visiting war-torn galaxies, where Humans and Aliens are deadly enemies. Together they must find a way to save the galaxy. The plot lines are packed full of great detail with many highs and lows around each meteorite.

This book was really entertaining - it was both original and inventive. When I turned to the very last page I was filled with great sadness as I didn't want the story to end and also because of the tragic turn of events. I would really love to see a sequel, but I'm very doubtful that one might come. I would really recommend buying or borrowing this book otherwise I feel that you might regret it.

jongleuse said…
Very excited about this book-we are great fans of Varjak Paw in this household! Have ordered.
6 August 2013 at 21:46

Mr Ripley's Enchanted Books said…
Thanks Said, I was not sure the comment was private. I have pulled it from public view. All the best V
6 August 2013 at 23:37