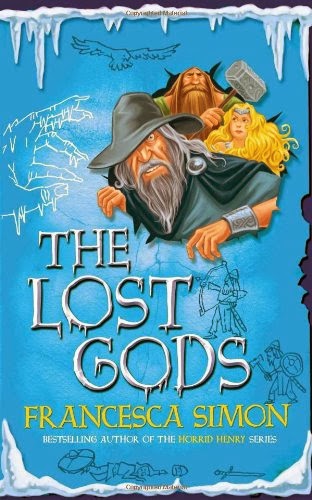 When gods become celebrities at JORVIK Viking Festival VIKING FESTIVAL
'The Lost Gods' with Francesca Simon -
19 February 2014 at the Merchant Adventurers’ Hall, York
What happens when Norse gods decide to become celebrities? A new book by children’s author Francesca Simon, creator of ‘Horrid Henry’, explores this very subject, as visitors to JORVIK Viking Festival’s mid-week ‘Meet-the-author’ event will find out on Wednesday 19 February at the Merchant Adventurers’ Hall.
‘The Lost Gods’ is the sequel to her 2011 book ‘The Sleeping Army’, which re imagined a world in which Norse mythology had been adopted as the primary religion in England. In the second book, with their popularity waning, Odin, Thor and the crew decide to jump on board the celebrity bandwagon, with hilarious consequences.

On Wednesday 19 February, children have the chance to meet the best-selling author as part of the JORVIK Viking Festival, ask questions about the Norse-inspired world she created and have their books signed.
Francesca’s talk is just one of the literary-themed events taking place as part of the 30th annual JORVIK Viking Festival. On Thursday 20 February, St Helen’s Church in York becomes the setting for an atmospheric retelling of Beowulf. Peter Carrington-Porter presents a modern adaptation of the historic poem about Norse monsters and myths, continuing the Viking tradition of storytelling in a space lit entirely by candles.

Author Joanne Harris will also be hosting a Norse-mythology themed event as part of the Festival, talking about her book “The Gospel of Loki” on Sunday 16 February at York Mansion House.
Prebooking is strongly advised for all events, as places are limited. Tickets are available online via the Festival website (www.jorvik-viking-festival.co.uk). The Lost Gods takes place at 2.30pm on 19 February at the Merchant Adventurers’ Hall, with tickets priced at just £5.00 per person. Beowulf by Candlelight is hosted at St Helen’s Church at 4.00pm and 7.30pm on Thursday 20 February. Tickets are £7.00 for adults, £5.00 for concessions and £4.00 for children. The Gospel of Loki takes place at York Mansion House at 2pm on Sunday 16 February. Tickets are £7.00 per person.

Tickets are also available for the JORVIK Viking Festival’s grand finale event at the Eye of York on Saturday 22 February. Gates open at 6.00pm, with entertainment from 6.45pm, including thrilling live battle action, sound and light effects with stunning pyrotechnics. Tickets are prices at £12.00 for adults or £9.50 for concessions, with a family ticket (up to four people) for £36.00.


More information and tickets are available online at www.jorvik-viking-festival.co.uk, or telephone bookings can be made by calling 01904 615505.
By Mr Ripley's Enchanted Books on January 31, 2014