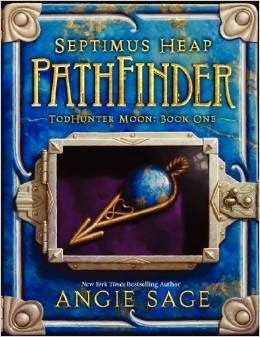 When Alice TodHunter Moon—who insists on being called Tod—was five years old, she saw a beautiful golden dragon boat fly over her PathFinder village. She knew at once that the boat was Magykal.
That was years ago, before her mother died, her father disappeared at sea, and the Garmin took her best friend, Ferdie.
Now it’s up to Tod and Ferdie’s brother Oskar to rescue Ferdie from the Garmins’ keeper, the malevolent Lady. Their journey takes them to the Castle, where they receive help from ExtraOrdinary Wizard Septimus Heap and Ex-ExtraOrdinary Wizard Marcia Overstrand.
But the Lady’s brother, the Darke Sorcerer Oraton-Marr, has a plan that will put everyone Tod holds dear in danger. To save her people, Tod must embrace her identity as a PathFinder and navigate the Ancient Ways—mysterious Magykal paths leading to unfamiliar—and sometimes dangerous—lands.
Taking place seven years after the story arc of the original bestselling Septimus Heap series, and full of Angie Sage’s characteristic humor and heart, PathFinder celebrates the joy of discovering one’s own personal Magyk, and of choosing the path that lets that Magyk flourish and grow.