Today I'm very pleased to be interviewing Jason Rohan, the author of "The Sword of Kuromori" and "The Shield of Kuromori." I'd like to thank him for agreeing to do this interview and for taking the time out to answer a few questions for Mr Ripley's Enchanted Books. This has been one of my favourite Q&As that I've received recently - very interesting and incredibly engaging. Thank you very much.
Tell us a little bit about The Sword of Kuromori and the series?
As the title suggests, The Sword of Kuromori is somewhat unique for a kids' book in that it's set entirely in modern Japan. Japan is one those countries that everyone knows a little about but at the same time is still viewed as exotic and largely unknown which is odd given the huge presence Japanese culture has in our lives. Be it film, comics, consumer electronics, cars, toys, games, fashion, cuisine - you name it - Japan has its influence.
Having spent five years in Japan, living and working the sarariman lifestyle, I wanted to bring that rich culture to a wider audience, not only by describing everyday life in the country, but also by tapping into its history, religion and folklore. As with Europe, villages were quite isolated in feudal times and regions developed their own distinctive traits, such as dialects, foods and folk tales. These diverse myths create a rich backdrop to set a story against and I had a blast bringing some of these ancient stories kicking and screaming into the 21st century.
One of the central conflicts I see in modern Japan is the clash between a fiercely traditional society and a fast-paced world which embraces technology. I decided to take that old-versus-new battle to a literal extreme by having ancient Japanese gods adopt modern science to settle old scores, and that's another aspect which I think sets the Kuromori books apart from other middle grade fantasy stories.

Is there a message in your novel that you want readers to grasp?
There is, but I try to be subtle about it as I think readers don't like the sense that they are being preached to. The Kuromori books each have a different theme which is etched into the DNA of the story. The first is about the power of belief, of having faith in yourself and in not giving up when life sets you back - I think every aspiring writer can relate to that! The second book explores the classic samurai dilemma of 'duty versus desire,' and the third book is about duality and the necessity for balance. In every case, the theme grew out of the story and not vice versa.

How much of the book is realistic?
I'd like to say, "all of it," but I probably can't get away with that in a book featuring magic, myth and monsters! I did try to portray life in Tokyo as realistically as possible, so I write about public transportation, language, using chopsticks, correct etiquette when visiting Shinto shrines, bowing, removing shoes, public baths, the tea ceremony, even correct shuriken-throwing technique! I tried to get all of the everyday aspects as accurate as I could with the idea that someone could read the book and have a good idea of what to expect if they ever visited Japan.
How much research do you do?

Tonnes! It's hard to measure exactly, because I tend to do research as I go along. For example, I have a section in the book where the main characters take a tour of the Imperial Palace, something I wasn't able to do when I was there. After a few hours of serious digging I was able to take a virtual tour, cross reference several Japanese guide books, check maps, read visitor blogs and collate what I needed. I also did a lot of reading up on Japanese mythology and folklore as background. It helped that my Japanese is still serviceable so I was able to go to the source for a lot of my research. In fact, that language barrier is probably one of the biggest reasons why Japanese culture remains largely unknown to western audiences.

Do you work to an outline/plot or do you prefer to see where an idea takes you?

I'm definitely a plotter by nature and you'll see a classic three-act structure in what I do but that doesn't mean I write an outline and stick to it slavishly. Most of my novels tend to start out as back-of-the-envelope sketches, and I start writing with that loose map in mind and then see where it goes. I'm a firm believer in always knowing the direction you're drifting in and in knowing your ending, but I'm open to taking detours and feeling my way through a story, because characters will surprise you and do their own thing if you let them. While it's important to not be too rigid, I don't fancy writing a whole book straight off the cuff. I can't afford the time if it goes spectacularly wrong!

Is travel an important aspect to you, as your books are based in Japan?
I love travel and have been fortunate enough to visit many parts of the world, but there's always more to see, learn and discover. I have a fairly diverse background being Indian by genetics, Caribbean by heritage and British by culture. My extended family includes Christians, Muslims, Hindus, Buddhists and Jews so I have a very broad view of the world. To me, people are essentially the same wherever they are; we have the same desires and needs. Travel, and by that I mean seeing how people live and sharing in their lives, rather than merely passing through and treating them like exhibits, is a hugely rewarding experience because it teaches you new ways of looking at the world. We are so steeped in our cultural mindset that we assume it is the only way of seeing things; exposure to different peoples shows us how blinkered we are and how little we know. For example, the concept of owning land is alien to some cultures. They see it the other way round and, if you think about it, it is absurd to believe that any individual can lay claim to any portion of our planet. The land owns us and that's a lesson that we'll be reminded of in the coming decades as the climate changes. 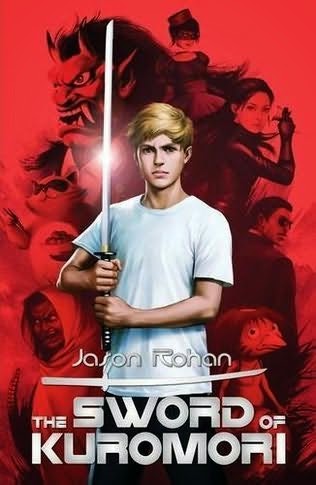 Do you think that the cover plays an important part in the buying process?
That's an intriguing question. I'd like to say no, that readers will discover new books through word of mouth or recommendations from trusted bloggers, but if packaging wasn't important, we wouldn't spend millions on it. It's funny, because I've had kids express reservations about the cover of The Sword of Kuromori yet go on to love the book. Equally, there are books that have gone on to huge success with covers that I don't find at all appealing. I've been very lucky, though, in that my publisher Egmont has involved me fully in the cover design process and I love the movie-poster/computer-game look that we've gone with.

Are there any authors that you have found inspiring?

As a kid, I devoured the Willard Price Adventure series of books and learned so much from them about animals, nature, science and the wider world. I also enjoyed classics such as King Solomon's Mines by H Rider Haggard and I can see even now how those novels inspired my rapid-fire style of writing. Stan Lee at Marvel Comics was another huge influence because not only did he write multiple titles simultaneously but he also went big with his ideas. Lee was never afraid to raise the stakes and go epic while retaining the sense of fragility that encapsulates mankind. Finally, I have to mention Sarwat Chadda because we go back a long way and seeing him break into publishing gave me the kick that I needed to get back to writing seriously.

Don't write for success. Don't write for the market. Don't write for your friends. Don't write to meet an arbitrary target. Don't write to win a bet. Write for yourself because not getting that story out will haunt you for the rest of your life. My father wanted to be a writer but he never knuckled down and only left a few pages of jottings. I wrote four books before I sold one and I was prepared to keep writing novels, even if I never succeeded, so I would leave my children a shelf full of finished manuscripts and they could say that at least I tried. Write because you have to. Everything else is a bonus.

Is there anything else that you would like to tell us?

One of the biggest surprises I've found this year is that there are so many really wonderful people out there who love reading, love books and give up their free time to share that love. The community of readers, writers, editors, agents, bloggers and publishers that I've stumbled across is like a big, warm hug and I'm honoured to be a member of that extended family. Thank you to everyone who has read this, supported their favourite author and spread the word about their favourite book. It's been a pleasure.
By Mr Ripley's Enchanted Books on February 05, 2015