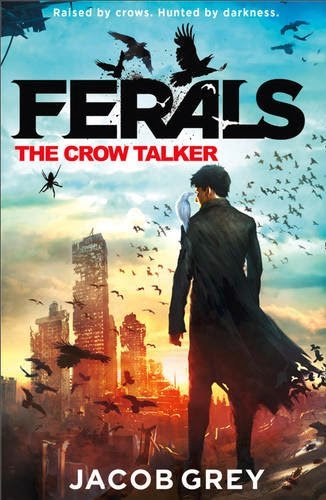 Book Synopsis: In a city ravaged by crime and corruption, 13-year-old orphan Caw’s only friends are the murder of crows he has lived with since his parents flung him from their house aged only five…
Caw lives in a treehouse in an abandoned city park, surviving on scraps of food and only communicating with his three crows. But a jailbreak at the prison forces him into contact with other humans – particularly a girl called Lydia, who is attacked by the escaped prisoners and is saved by Caw.
Caw realises that these escaped prisoners have more in common with him than he’d like… they too are FERALS – humans able to communicate with and control an animal species. And they want to bring their evil Feral master, The Spinning Man, back from the Land of the Dead. Only by joining forces with other good Ferals hiding throughout the city can Caw stand a chance of defeating them.

Book Review: Ferals is the first book in an all action-packed trilogy for readers with a hunger for the dark and the sinister. It has already been sold in thirty one languages and the film rights have been sold to 20th Century Fox. My thoughts before reading this were around whether the book would live up to the hype surrounding it. Well let's find out whether it did or not ....

I immediately felt that the author's ability to weave a spell was very good, especially for a debut book. The characters representing good were written particularly well in my opinion. The two main characters, Caw and Lydia, establish a friendship that is beautifully portrayed. It develops interestingly over time to add a sense of belonging to a world full of mystery and danger, as both characters become caught in a web of darkness due to different circumstances.

In contrast, the characters on the dark/evil side are incredibly vague to begin with. Over time they are slowly constructed into a life force and their purpose becomes clear. Most of the detail is really left to the reader's imagination; I really enjoyed adding in the additional extras to complete a whole. I really felt that this was intentional in order to form your own idea of the characters. I'm sure that this would work on many different levels, depending on the reader. Everything become particularly clear at the end of the book, but I shall say no more.

The ideas in this book are very in vogue at the moment; a story based on animals that can communicate with humans and, if you have the inherited ability, can also can be controlled by humans. I have read a lot of books recently along this theme, but this story explores a bit further into the dark and magical tales of terror.

The story explores the destructive past started by a wave of violence and crime called the Dark Summer. Centered around the city of Blackstone, a once thriving metropolis, Jacob builds the world and the fantasy plot to great effect. The more that you read, the more you become sucked into the story as he leads you down the twisted paths of his dreams. The characters develop into unconventional superheros which really makes the story an even more exciting read.

Following the main character Caw, whose only companions are a small group of crows, you will find him fending and defending himself on the streets of Blackstone. His journey catapults you into a high-octane adventure full of gritty and atmospheric undertones of good versus evil.

I sat down and read this book in one sitting, as it was such an enjoyable read. This is a book that you will appreciate if you enjoy opportunities to escape from reality; it takes the mind on a magical ride. It is that good that, when you get to the final page, you will want to read the next book straight away. It will leave you with that extra special feeling that indicates a really good read. 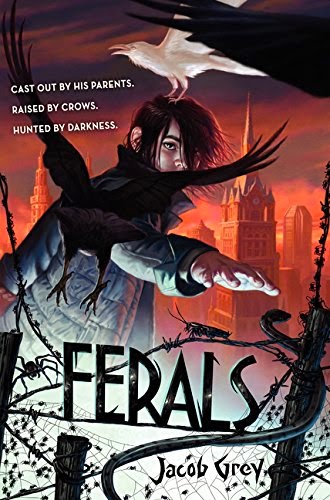 Published by HarperCollins Children's Books - US book cover above (April 28, 2015) Which one do you like?
By Mr Ripley's Enchanted Books on February 25, 2015