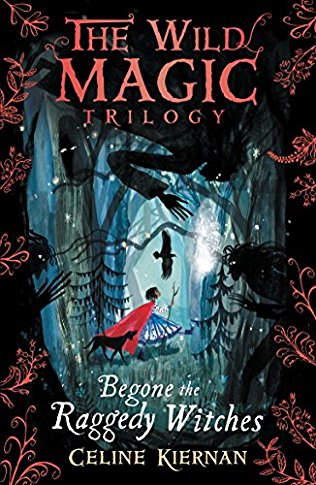 To celebrate the release of the fantastic "Begone the Raggedy Witches", Mr Ripley's Enchanted Books has taken the opportunity to ask some questions about the up and coming trilogy by Walker Books. It's a rich and fantastically dark story that will have you gripped. Here are the questions that we asked Celine about her recently published book. We hope they peak your interest to read this book.

Thank you Celine and welcome to Mr Ripley's Enchanted Books.

Begone the Raggedy Witches is my first book for younger readers. The main character is a girl called Mup who must cross over into Witches Borough to rescue her Dad from the clutches of the grandmother she's never met. On the way, Mup finds a brave, if cranky, new best friend in a creature called Crow, discovers that her brother prefers life as a dog, explores powers she never thought she'd be allowed use, and faces up to a whole mess of complicated family history.
Well... I guess they're just real to me! All the characters in 'Raggedy Witches' have their own long histories stretching behind them, and their own deep-rooted reasons for behaving the way they do. Most of them have been alive much longer than Mup, and they've been shaped by their experiences living under her grandmother's less-than-gentle reign. It's hard for Mup to understand or forgive how hard the residents of Witches Borough are sometimes, but I think the reader might find a thread of sympathy or understanding for each of them. As for Crow, he's had no-one to listen to him for so long that he's become sour and abrasive as a consequence. There's a caring, kind and affectionate heart under those glossy feathers - just don't expect it to show itself too often or on anything but Crow's own terms.
I suspect every writer's heritage influences them in subtle ways. I know that Ireland's uneasy relationship with personal freedoms and self-expression has led to my exploring ideas of repressed memory and hidden histories quite a lot. Especially the poison leaked into innocent lives from the undealt-with fallout of previous generation's (often undisclosed) actions. These themes are quite prominent in Raggedy, I think.
I had fun playing with the old Irish witch-lore of the hare too, specifically that witches can change into hares in order to cross to and fro across invisible borders and follow paths which others may be incapable of seeing.
When it comes to my own reading, I like a story that challenges my perception - something that presents new perspectives or philosophies that may broaden my thinking or enrich my horizons. I also like stories that inform me about ways of life I may never get to experience for myself. I like thoughtful meat on the bones of a good adventure or fantasy. A little depth lurking beneath the surface of the entertainment. Heart.

In my writing I try not to think about whether or not people might like the story. All my stories start out as explorations of something - me unknotting whatever philosophical conundrum is fascinating me at the time, or chewing whatever piece of social gristle I have the need to break down for myself. It's only later, when I go to edit, that I try to make the narrative enjoyable for the unknown reader (to make the pace bearable, to make the characters breath, to smooth out the writing to a readable level) But the story itself? That's always just for me - I write what I want to read at that time. To do otherwise would not work for me, as the process and the output would feel hollow.
I've been reading since the age of three. My mother said she couldn't get my head out of a book. She had to root me out from behind the sofa at my sixth birthday party because I'd been given a present of a book and I couldn't wait until everyone went home to read it. Stories were just a way of finding things out, of sharing other people's experiences, of seeing places I'd never yet been. And when I couldn't find one to satisfy me, I wrote my own.
I love it too. The Walker design team are amazing, and Victoria Semykina's artwork is astonishing. I do think a good cover makes a difference. It's the nature of the publishing beast. There are so many books to choose from and often it takes a really smashing visual for one to stand out from the rest. A good cover can't make up for a weak story though. The true test is when you start reading.
Well, the residents of Witches Borough have a lot of work to do. Mup and her family move across the border and into her grandmother's castle, hoping to lend a hand. But - much and all as some folk would like to think it possible - people can't just start from scratch after a lifetime of fear and hatred. You can't always dust off the past and shake hands with your memories and move on. There are some ghosts that can't be forgotten - some ghosts that won't be forgotten. And unless Witches Borough faces up to its past, it may not be possible for anyone to survive let alone to move on.
I read a lot, yes, despite having a very busy schedule. I tend to read biographies and history books a lot, and to have favorite books rather than favorite authors. But there are some writers I find myself returning to again and again. Sebastian Barry is one, Shirley Jackson, Jennifer Egan, Stephen King, Edith Wharton, Louis de Bernieres. I've just discovered Geraldine McCaughrean and Michelle Paver and I will be hungrily eating up their work as soon as edits to Raggedy Two are done!
Trust young readers, be honest with them, and stop worrying about what stories you think they want to read. Create stories about the things that motivate, inspire and entertain you. Produce books that are meaningful in a genuine, non-pandering way. The audience will follow.