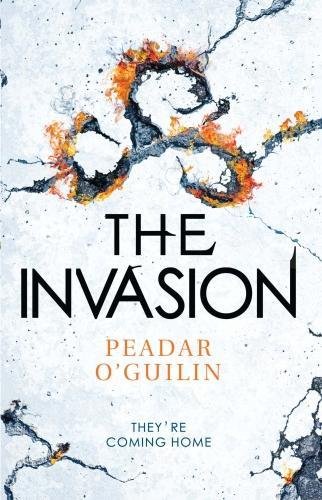 In a world where teenagers are trained for the most horrific 3 minutes of their lives, Nessa and Anto have both survived their Call, but fate has a cruel way of rewarding them. Nessa is branded a traitor as no one believes that someone like her could survive the experience. She's thrown in prison and eventually sent where all traitors are sent - back to the horrifying Greylands, but this time there's no way home. Anto is packed off out of the way to join the militia. Ireland is being invaded and the enemy are building their army from the very people defending it. However, Anto can't get Nessa off his mind, he knows in his heart that she's innocent and he'll go to any length to rescue her. The final chapter in this thrilling and fast-paced adventure with the power of true love at its very core.


I've been invaded by The Invasion of Peadar O'Guilin's long-awaited sequel to the Call. It is soon to be published on the 1st March 2018 by David Fickling Books (the home of great stories). In this book, we are reunited with the two main characters, Nessa and Anto. They survived the Call, but what's in store for them in The Invasion is more terrifying than you can ever imagine. The complexity of this book is brilliant. From the very start, it pulls the reader on a journey that is captivating. The story is beautiful and brutal at the same time which makes it both compelling and disturbing in equal measure.

It's a fantastic blend of action horror written in its own unique style. Not using any of the classic tropes normally found in this category, it really makes this story stand out and addictive to read. The plot is dark and twisted just like the characters. In a world full of monsters, Sidhe's are disfigured, amalgamations of human flesh and animals/beasts. They are very cunning in character and appear to morph from the dark depths of the author's psyche into a very bizarre world.

You will prowl into the strange and disturbing land of the Greylands which is very descriptive and well written. It will both captivate and thrill you in equal measures. The author has cleverly blended his fascination for mythology and Irish legend by instilling a very unsettling creepiness that follows you around through every twist and turn. The nation must survive but will they survive? That is most definitely the question.

This is a fantastic sequel. In my opinion, it is even better than the first book which is something that I very rarely say or think. The author has spent time inventing and building a brilliant backdrop that is even more surreal than the last book. It certainly sucks you into a vortex of evil and chaos. The characters have been very well written, their personalities and emotions are depicted at just the right times through the story. Their different viewpoints come across very clearly and are very much in keeping with the storyline. The story is more compact, fast-paced and free-flowing whilst delivering just the right amount of character dialogue and back history to bring the reader up to speed on the previous story.

The author has taken no prisoners with this book. It's a bloodbath fuelled on high adrenalin action that is both unpredictable and deeply satisfying to read. I really loved this book. Thanks, Peadar - I'm looking forward to the next book, whatever it maybe.