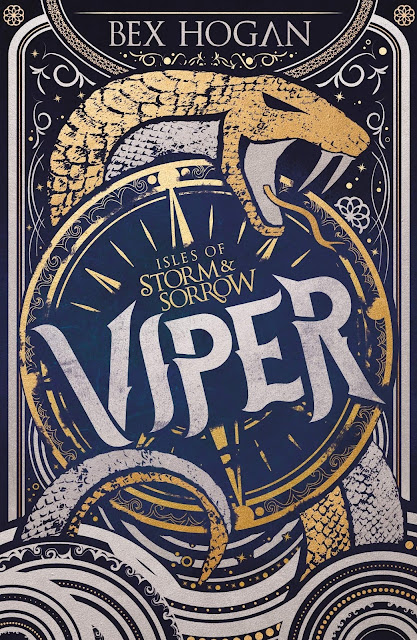 Marianne has been training to be the Viper for her entire life - to serve and protect the King and the citizens of The Twelve Isles - but to become the Viper and protect the islands she loves she must find the strength to defeat her father. A new fantasy trilogy perfect for fans of Sarah J Maas.
He will make me a killer.
Or he will have me killed.
That is my destiny.
Seventeen-year-old Marianne is fated to one day become the Viper, defender of the Twelve Isles.
But the reigning Viper stands in her way. Corrupt and merciless, he prowls the seas in his warship, killing with impunity, leaving only pain and suffering in his wake.
He's the most dangerous man on the ocean . . . and he is Marianne's father.
She was born to protect the islands. But can she fight for them if it means losing her family, her home, the boy she loves - and perhaps even her life?
A storm is brewing this April with the debut book by Bex Hogan. Viper is the first book in the Isles of Storm and Sorrow trilogy published by Orion in paperback on the 18th April 2019. The book cover illustration shimmers in the dark and lights up this fantasy. The artwork has been cleverly developed by Samuel Perrett alongside source images from Shutterstock. I have to say it is really eye-catching and instantly makes you want to pick up the book and read it.

Turning the first few pages, the story soon captures your attention. The first incision of blood seeps off the pages and floats to your brain. The fluttery wings of a dead bird whisk you on a fantasy ride of a lifetime. The author is holding nothing back in this thrilling Young Adult book that I absolutely loved. In my opinion, the YA genre at the moment is at its best with lots of original and captivating stories appearing on the horizon.  This is an adventure set on the high seas with a gutsy/brave and endearing character, seventeen-year-old Marianne. Her destiny is to become a Viper, a feared defender of the Twelve Isles, but what will she encounter on the way?

Whatever the answer, it will have you flying by the seat of your fantasy pants. This is an epic story set on the high seas. It's a voyage of discovery for Marianne as she follows her destiny and hopefully uncovers the mysteries of the ships crew the Maiden. The plot will leave the reader treading a tidal wave of death and destruction. The plot is not for the faint-hearted but it has just the right amount of detail to give you an enjoyable and exhilarating ride for the harder fantasy armchair adventurer.

This is a very well-written story that has everything for you to enjoy and really love. There is an abundant amount of action and drama that will keep you engrossed. The author has placed a little sprinkling of earthly magic into the story that lifts the narrative up a notch. I loved the plot idea which makes it crazy, wild and slightly surreal in places.  The alluring cruelty of the characters whilst also instilling a small amount of warmth and feelings makes for great reading in the plot.

All in all, this is another outstanding read that comes will all the trappings of another two books to follow. After surviving the cracking climatic ending, it makes you want to start all over again. Providing your heart hasn't already been torn to shreds. Buzzing and brilliant, get this book pre-ordered now or I'll make you walk the plank - you salty sea dogs....
By Mr Ripley's Enchanted Books on February 06, 2019