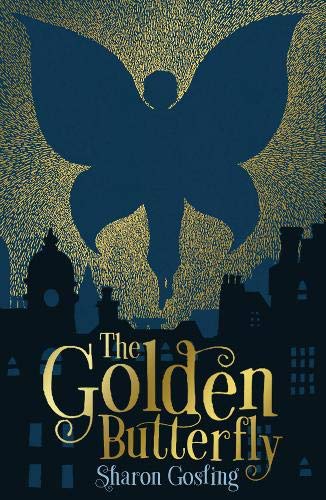 Let the show begin with the latest book by Sharon Gosling. The Golden Butterfly will be published this May 2019 by Stripes Publishing. The fantastic golden book cover has been produced by the talented Pip Johnson and will certainly sparkle on the bookshelves. The story is set around 1897 and is particularly rich in detail at a time that magic was a spectacular event. It's a fully engrossing period read that makes the reader think back to the golden age of performance. However, it's also a time when women were never permitted to do magic and strict rules were adhered to by the Grand Society of Magicians.

It's 1897 and since the Magnificent Marko dramatically departed the stage, no magician has come close to performing a trick as spectacular as the Golden Butterfly. With her grandfather gone, Luciana feels that the world has lost its wonder. Then the imposing leader of the Grand Society of Magicians appears, searching for something belonging to Marko, and Luciana is drawn into a world of danger and deception. As she battles to protect her grandfather's greatest legacy, can she distinguish reality from illusion?

This book has a theatrical delight that will entertain readers. However, the tiny lights glint on the soft white snow and sadness comes sweeping in as life sadly slips away for Luciana's grandfather - The Greatest Magician - MAGNIFICENT MARKO. Then when a strange man comes looking for a mystery object, the plot once again grazes the reader's fantasy taste buds with a sense of sadness. However, Luciana and her best friend, Charley, are soon hurtled into a headlong adventure full of puzzles to solve. Whilst also hoping to uncover the hidden secrets to one of the best magical illusions ever seen, THE GOLDEN BUTTERFLY.

This fast-paced narrative ticks all of the boxes when it comes to an entertaining read. I was hooked and mesmerised by a story full of colour and a set of strong characters that felt both real and believable; they certainly make you want the best for them. The book shows intelligence and tackles social issues that I felt were well researched and poignantly used in the plot. The story is a fantastic fluttering performance full of suspense, drama, family secrets, and dazzling bravery that will shine and hit you in the heart.

The plot is brimming full of friendship, loyalty and lots of deceitful deeds which makes this journey all the worth following. As the plot unfurls, the sense of mystery will engulf the reader and as the curtain falls, the fantasy soon roars into a middle-grade read that will certainly appeal to everybody. I loved the ending of this book; it wraps the story into a cinematic vision that will leave you breathless and wanting more. You will be desperate for an encore as the joy spills out leaving you enchanted, uplifted and longing for another book. This is a fantastic read from start to finish; an unexpected MARVEL that is very much recommended by Mr. Ripley.
Posted by Mr Ripley's Enchanted Books on May 02, 2019