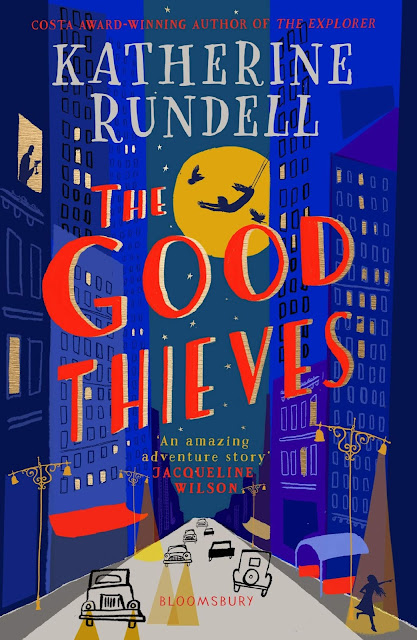 Trotting out this summer is the latest installment by Katherine Rundell. The Good Thieves will hit the shops on the 13th of June 2019. The book will be published in a lovely hardback edition by Bloomsbury Publishing. I'm a very big fan of the amazing cover that has been produced by Matt Saunders. In the finished copy, which I have not yet seen, there are some exquisite black and white chapter headers by the illustrator as well. They not only add a little slice of detail but also transport you straight back to the 1920s in New York City. 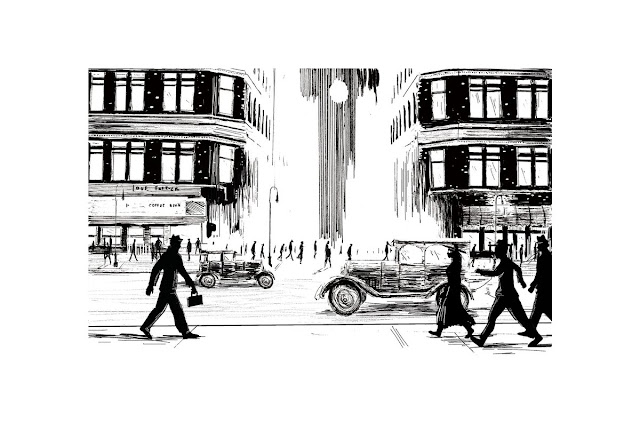 This is an example of one of the images that I've had permission from the illustrator to use from his Twitter feed. You can check out some of his others at: @msaunders_ink.

The magic of adventure is here to see in this book. The opening lines of the first chapter are both poetic and captivating. Vita set her jaw and nodded at the city in greeting, as a boxer greets an opponent before a fight. That is probably one of my favourite opening lines to a book for some time. It feels like a quotation from the great boxer, Muhammad Ali.

The plot is focused around a group of children (all fantastically different) who come together to right a wrong. Vita is the main character. A born fighter, she arrives on the wind with her mother from England. Fresh off the boat in New York City, she admires the horizon: tall, grey, blue and beautiful. However, Vita Marlowe is there for a reason. She has a job to do. Her beloved grandfather (Jack) has been cheated out of his home and possessions by a notorious conman with Mafia connections. Seeing Jack's spirit is broken, Vita is desperate to make him happy again. So, she devises a plan to outwit his enemies and recover his home. However, will Vita and her newfound friends be up to the challenge?

The story slowly creeps inside you and grips you with a brilliant all-out action heist of a plot like no other. As the adventure slowly builds, the characters personalities seep through and pull you on a journey of friendship and crazy antics that entertain. It's a story of loyalty, bravery and clever thinking. There are some brilliant moments built in which make this book both an entertaining triumph and a joy to read.

The author has done a fantastic job of capturing the time period - approximately five years after the First World War. The children in the book radiate the feeling of recovery and anticipation as they bring their talents together to overcome any obstacles in their way. It's a fantastic story to escape into; an acrobatic circus of delights and truly wonderful storytelling with nature and wildness running at its heart.

This is a brilliant story full of heart-stopping moments, thrills, spills and many different smiles. It's a fantastic performance - a pickpocket delight to read - where two boys with unusual skills, two girls full of determination and a host of animals find themselves in a death-defying adventure. What more could you possibly want?
By Mr Ripley's Enchanted Books on June 12, 2019