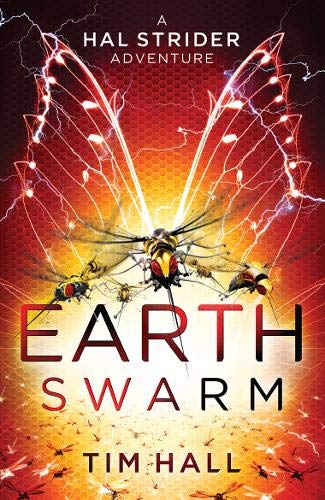 Tim Hall's first novel for David Fickling Books was a dark and edgy retelling of Robin Hood and Sherwood Forest called Shadow of the Wolf. I remember the amazing hardback cover as it was certainly striking and captured my full attention. Some years on, Tim's second book is due to buzz into existence on the 4th July 2019. It is very different in subject matter and writing style.

Earth Swarm will be the first novel featuring teenage hero Hal Strider. In this pocket rocket adventure, the main character faces the world of advanced technology. Hal Strider is desperate to be involved in his father's business which develops drones for the military. This starts the narrative swarming from the very first page and builds into an epic battle between the human race and artificial intelligence.  The story is skillfully written as KILLER DRONES ATTACK London. The scene is visually brilliant and the author has captured the moment with a sense of mayhem and chaos. This has an impact on the small cast of characters as the plot dramatically unfolds above and below the streets of London.

The drones, controlled by artificial intelligence, are terrifying as they adapt, replicate and build their strength in numbers. The ensuing war between the military is gripping, however, the only people who can save the city are Hal, his sister Jess and a stranger called Sky. The further you follow the characters, the more the emotions come to light as they take you on a thought-provoking, adrenalin-fueled ride.

The story is very cool and should engage young and old readers alike. It is very on trend through the use of drones and advanced machines. The story has a fast-paced narrative giving it a cinematic quality which stretches the pixelation of the fantasy mind. The book has many explosive and turbulent events that ramp up the tension in the face of a remorseless foe.

THE MACHINES ARE COMING . . .  Life will never be the same again. This is a battle with mind-blowing destruction where a great many lives are lost. However, the story is fantastically written, well-developed and well thought out. We learn about the truth and the scary lengths people will go to in the name of furthering artificial intelligence. So, strap yourself in for a roller-coaster Sci-Fi adventure with some timely twists and turns that will make your head spin. Could this be a vision of the near future? ...
Posted by Mr Ripley's Enchanted Books on June 26, 2019