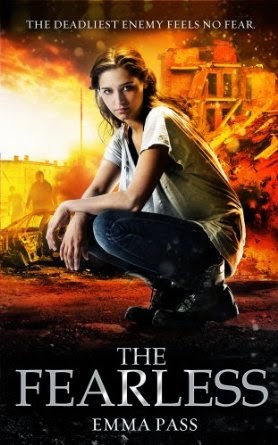 The end of the UK as we know it…

THE FEARLESS is set in the UK in the near future, imagining what would happen after the world is overrun by psychopathic super-soldiers – The Fearless – who want to turn everyone else into Fearless as well. Society as we know it has collapsed and small bands of survivors fight for their existence. While I wrote this book, I needed to imagine a UK very different to the one we currently live in…

First of all, I needed to create a refuge for Cass, THE FEARLESS's protagonist, and her family. After some searching on the internet, I found out about a tiny island off the coast of Japan called Hashima (or Gunkanjima) island. This island is man-made and was built in 1890 to house workers extracting coal from undersea mines. In 1974 it was abandoned, but many of the apartments still remain with people's posessions inside. Although I have never been (yet!) it really captured my imagination and inspired me to create Hope Island, a similar place off the coast of the UK.

Another setting that features heavily in the book is the bunker where Myo and his group live. There are abandoned military bunkers all over the world, including in the UK, and again I did a lot of internet research and read several books such as this one to help me create Myo's bunker, which is located in the middle of the remote Staffordshire moorlands, an area I know quite well in real life.

As for imagining what the rest of the UK would look like once society had fallen apart and most towns and cities had been abandoned, that was a matter of combining imagination with more research. Luckily, I have a day job in a library, so I was able to source lots more interesting books about abandoned places and urban exploration to help me picture the ruin and neglect I wanted to describe.

Finally, I needed a city location where I could place the Fearless lair, a place where these monsters have gathered to begin a new wave of attacks. London? Lots of potential there, but I'd already used it as a setting in ACID. Still, there were some great locations. Battersea Power Station, maybe? Or how about Buckingham Palace? Or Westminster?

In the end, though, I decided not to set this part of the book in London at all; I decided to look a bit closer to home instead. I'm not too far from Sheffield, and there was a certain location there that was just crying out to be used. Somewhere just outside the city; huge, and with plenty of places to hide. Somewhere which, if overrun by the Fearless, could turn into place of nightmares known as the Torturehouse. I won't say too much more about it here – I don't want to spoil it for you! But if you read the book, and if you've ever been, you might just recognise it, and agree that it makes the perfect monsters' hideout…

Author Biography
Emma Pass has been making up stories for as long as she can remember. Her debut novel, ACID, is out now from Corgi/Random House in the UK, and from Delacorte in the US.  It won the 2014 North East Teenage Book Award, was shortlisted for the Doncaster Book Award, was nominated for the 2014 CILIP Carnegie Medal and has been longlisted for the 2014 Branford Boase Award and a Silver Inky Award in Australia. Her second novel, THE FEARLESS, is out on 24th April 2014 from Corgi/Random House and in early 2015 from Delacorte. By day, she works as a library assistant and lives with her husband and crazy greyhound G-Dog in the North East Midlands.

Many thanks Emma for this guest post. I'm really looking forward to reading your book particularly after this fabulous introduction. HAPPY Publication Day - we raise a glass to you and your new book which has now been released in the wild. Go and purchase a copy today and don't forget to tell us what you think.
By Mr Ripley's Enchanted Books on April 24, 2014