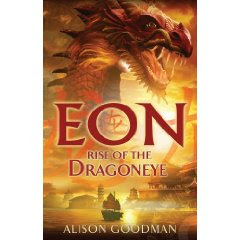 This is a great fantasy read set in an ancient Oriental world, drawing on Chines myths and tradition. Complex, vivid,and with themes of difference,and politics which have critical consequences for Eon.It's a real page-turner, with fights and chases aplenty, but the narrative itself isn't in a rush, it's simply and well written and well worth the read.Eon is probably intended for the young adult market but this will be a big hit with younger avid readers.

So all in all i give this book four out of five but i know this book is going to be a big seller and and get alot of attention from all media avenues.

Twelve-year old Eon has been studying the ancient art of the Dragoneyes for two years. Singled out by an ailing but power-hungry Dragonmaster, he is desperate for the chance to become a Dragoneye, the human link to one of the twelve energy dragons and its power. But he is playing a dangerous game: Eon is actually Eona, 16 years old and a girl. His true identity must remain hidden at all costs: it is forbidden for women to practise the Art, and to be discovered would be punishable by death.Now the Rat Dragon seeks a new apprentice and only one boy will be chosen. The twelve candidates approach the mirrors and perform ancient combat sequences to prove their worth. Let down by his injured leg, it seems that Eon is destined to fail, until a spectacular twist in events catapults him into the opulent but treacherous world of the Imperial court. Without a master to guide him, Eon must learn to harness his unprecedented natural power, while protecting the secret that could cost him everything ...Set against a rich backdrop of Ancient Chinese myths and traditions and fraught with tension.

Book published by David Fickling in the U.K January 2009 also to be released in the U.S in late December through Viking Children's Books.
By Mr Ripley's Enchanted Books on November 26, 2008