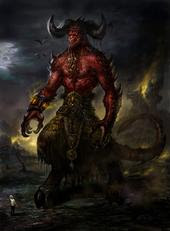 The pupils of the Nightmare Academy are in for their hardest year yet, as the Named monsters of the Nether prepare to break free! Final exams don't normally end in death, but Charlie Benjamin's final exams are far from normal. When Charlie, Violet and Theodore embark on a routine test in the Nether, they don't expect Violet to be abducted by demonic, kangaroo-like Dangeroos and they really don't expect to end up in the middle of an all-out breakout attempt by the remaining Named monsters. With the mysterious "Guardian" under threat, and Barakkas and Verminion still loose on earth, only the misfits of the Nightmare Academy stand between an oblivious humanity and total annihilation. Because if the Four Named should ever escape the Nether and assemble on earth, they would be able to summon the Fifth. And that, by all the most reliable accounts, would be Bad. Really, really Bad.

We're under attack! The last of the mega-monsters known as the Named are fighting their way into our world, and only a mysterious being known as the Guardian can help -- but the Guardian is dying. To save him, Charlie Benjamin and his friends from the Nightmare Academy must journey into the heart of a Hydra cave, through the spooky Bermuda Triangle graveyard, and across the treacherous, monster-filled San Diego Zoo.

I have used the American book title as i have only got the American proof copy.
All of the books in this sereies have diffrent book titles in the U.K.
This is the second book in the series wich i love more then the first book. This book was totally original and really distinguished this story from other books. The story was fast paced, exciting, and I couldn't put it down.All in all four out of five.I hope to have some more news soon on the next instalment and possably the new film.

Book released date 5-Jan 2009 Harper collins paper back in the U.K if you want to read it now you can buy an american copy now on Amazon.

I have now had reply fron Dean Lorey and this is part of the email.Thanks very much Dean...........

Thanks very much for your great review! Book 2 comes out in the UK at the beginning of January and will be called MONSTER REVENGE (my preferred title, by the way). Book 3, MONSTER WAR, is currently scheduled to come out in the US and UK around the same time -- late summer of 2009. That book is completed.

Thanks again for your enthusiasm and your site is terrific!