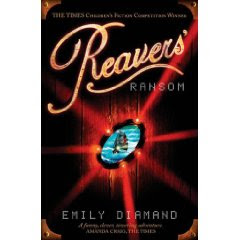 Barry Cunningham left Bloomsbury and in 2000 set his sights on starting up Chicken House, a dedicated publisher of children's literature. Discovering authors who have a talent for storytelling and a voice as distinctive as J K Rowlings. Chicken House and the Times recently launched a children's fiction competition in The Times newspaper. The winner was Reavers' Ransom by Harrogate author Emily Diamand.
Emily admits she went into self-denial about her prospects of being short-listed and believed that if she even thought about winning for a moment, it wouldn't happen. Emily Diamand's book did shine out over all the other stories and has now been published to some success. Emily has had huge interest from more than forty countries and great PR support with wider national and international coverage. The book was launched at the Cheltenham book festival and now has people speculating if Emily is the next J K Rowling.


This is the synopsis for Emily Diamand Reavers' Ransom.

Lilly Melkun is out fishing with her sea-cat when the bloodthirsty Reavers come raiding and steal the Prime Minister's daughter. Her village blamed, Lilly decides to find the girl. Off she sails in secret with a ransom - an extraordinary talking jewel. But nothing can prepare her for what happens next ...

This is one of the best written stories this year.

Set in the 22nd-century in an England partially flooded by climate change, Reavers' Ransom follows the exploits of Lilly Melkun who finds herself embroiled in the kidnap of the Prime Minister's daughter.I loved every page of this book not Knowing what was going to happen next.With it's well written story and it distinctive voice makes it a memorable read.

SO THIS BOOK GETS FIVE OUT OF FIVE AND MAKES IT A GREAT COLLECTIBLE OF THE FUTURE.