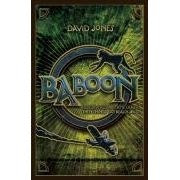 Gerry finds him self in a plane crash after getting struck by a lighting storm. When Gerry comes through he finds himself trapped in the skin of a baboon. He finds him self adapting to a baboons way of life, while emotionally missing his parents and his only school Friend Milton.This makes a great read as David Jones degree in zoology shows through the quality of his written and the story he tells. It's great book to read for all ages.

I will give this four out of five.

This is the synopsis for the book.

Fourteen year-old Gerry and his parents are returning to the African Savannah after six months in London when their plane crash lands in the jungle, killing the pilot. When Gerry wakes, he has a terrifying shock. He is now a baboon. Using his human intellect and powers of reason he ensures his survival and growing acceptance by a baboon troop. Just when things are getting comfortable, a shock attack by a leopard triggers Gerry's re-entry into his own body. In hospital, Doctor's tell him he has awoken from a coma - but does Gerry have the scars to prove otherwise?


This book is now to be released Jan 5Th by Chicken House in the U.K and has already been published in the U.S.

And a big thank you to for Chicken House for sending me a copy to review.
By Mr Ripley's Enchanted Books on November 21, 2008

I think the site looks great. Have you got a copy of Changeling? If not, do you want me to ask Macmillan to send you one once they are available?