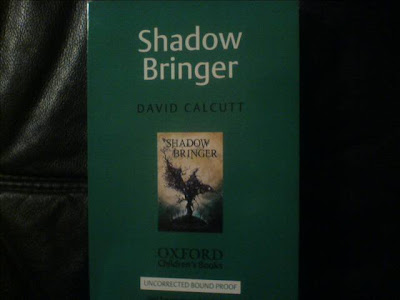 This is the second major children's book written by the new talent of David Calcutt his first book was entitled "CrowBoy".His new book is called the Shadow Bringer which will be released in February.The story is a cross between David Almond and Michelle Paver which makes this story a powerful read.

The story sets a very dark atmosphere. As a reader you feel you are being watched! It follows the unknown journey of Nathan out walking with his dog. Whatever it is, it's after him. Will it get him?I think you should find out!!

I give this book three out of five as I did have some small issues with this book. It could have had a little more story content and I felt there was a slight repeating of dialogue. But overall something you should read.

It starts when Nathan is out walking in the fields with his dog. Something is watching him - something menacing and dangerous. Something without a shape, that he can't get out of his head. The Creature. Then there's the noises he starts to hear in the attic. Shuffling. Scratching. Even a voice. The Bogeyman. Somehow Nathan knows that the Creature and the Bogeyman are the same thing. And whatever it is, it's after him. As soon as it's strong enough, it will show Nathan what it really wants. And it's growing stronger all the time...

This is quite a fair review of the book. I am glad that you have taken the time to read it, and have enjoyed it. I agree, it is as powerfully dark read. Compelling in my mind, and beautifully written.
I note that you do not feel the book has enough story, and that you feel there is a 'slight repeating of dialogue.' I am not entirely sure what you mean by this. I would like to see a few examples, as having the read the book several times myself, I have not yet come across such repetition

(Also, you may want to double check your spelling.)