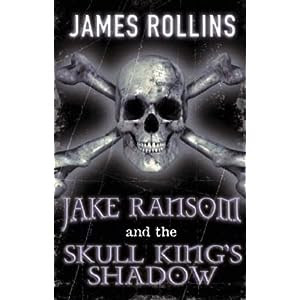 I wasn't sure what to expect from this having previously read some of James Rollins adult books. I was curious as to how his writing style might differ to appeal to a younger readership and on the strength of this I have been impressed. Jake Ransom And The Skull Kings Shadow is the first of what it seems will be a series of books featuring young Jake.
Three years ago a mysterious package arrived for Jake and Kady Ransom. Inside were two halves of a Mayan gold coin, their mothers sketchbook and their fathers notebook. But their archaeologist parants failed to return from an expedition to the site of a long lost Mayan civilazation. Now Jake and Kady are plunged into a terrifying adventure.
...and what an adventure it is. after being mysteriously invited to open an exibition in London which featured many artefacts uncovered by their now missing parents. One of these items holds a rather unholy power and transports Jake and Kady to an ancient time and so starts a tale involving dinosaurs, past civilizations and strange alchemic powers.
A genuinely good read and I find myself looking forward to the next instalment of the Jake Ransom story "Jake Ransom & The Howling Sphinx" which will be released in the spring.
By Peel07 on August 17, 2010

Sounds awesome! I'm loving my Google Reader this morning because I've found 3 books that will be great for the boys in my classes!