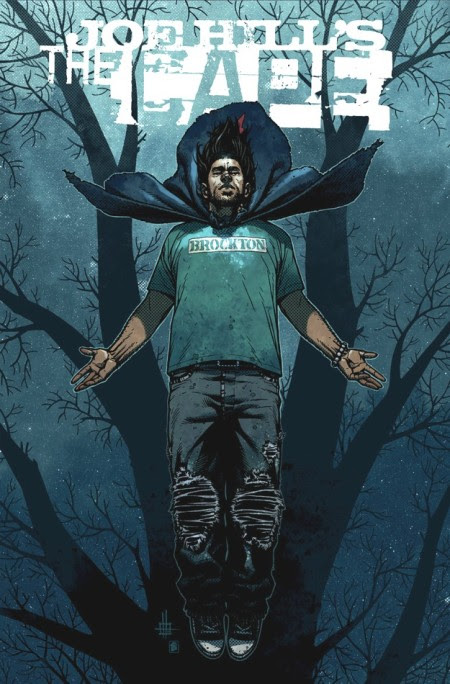 NOT SUITABLE FOR YOUNGER READERS!

Eric was like every other eight-year-old boy, until a tragic accident changed his life forever. The Cape explores the dark side of power, as the adult Eric – a confused and broken man – takes to the skies… and sets out to exact a terrible vengeance on everyone who ever disappointed him.
This critically acclaimed, Eisner-Award nominated story, written by Jason Ciaramella, based on the short story by New York Times bestselling author Joe Hill, with art by Zach Howard and Nelson Daniel, will linger with you long after you turn the last page, and force you to ask yourself the question: “What if?”

The Spider brands his emblem on the foreheads of his victims. It’s a classic trademark of the character, and I wanted to get that in there quickly. Sewing fear is one of the best ways for the Spider to keep himself alive, and mutilating the corpses of your victims is certainly a time-honored method of sewing fear. It’s pretty twisted when you think about it. However, right away we get the Spider’s extreme behavior juxtaposed with his motivation. The bad guys he killed were human traffickers. Extreme punishments for extreme crimes – and really, that’s at the heart of who the Spider is. He is over-the-top because his enemies are over-the-top. Also, I really love the red spider laser in the first panel.

And the last item to be bought today was #113 Fables - Celebrating 10 years this is should be a good read as well.

Therese has been missing for days now, leaving Snow and Bigby frantic. If that weren't bad enough, now Dare can't be found either! What's there to do but turn all of Fabletown and all of The Farm upside down and organize a search party? And in the backup story, the revolution in Oz has been called off. Why? Well, it may have to do with the fact that someone went and hanged their leader. Don't you hate when that happens?
By Mr Ripley's Enchanted Books on May 24, 2012