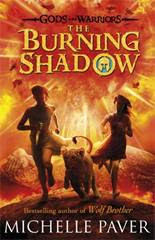 Young people with a talent for spinning an adventurous yarn are being invited to take part in a unique writing challenge by bestselling novelist Michelle Paver.

To mark the release of her new book, Gods and Warriors: The Burning Shadow, the award-winning children’s author is launching ‘Write for the Gods’, a short story contest offering youngsters of all ages the chance to show off their storytelling skills and scoop some money-can’t-buy prizes.

The Burning Shadow is the second instalment in an epic five-part series transporting readers back to the Mediterranean Bronze Age, most of the research for which was done first hand with Michelle climbing volcanoes and meeting animals – dolphins, falcons and lions – that feature in the stories.

Now the author is calling on young wannabe writers to take inspiration from her books and adventures and submit their own original tale of up to 450 words.

The ten most imaginative and exciting stories – as selected by Michelle herself – will be published online as part of an official Write for the Gods page on social media platform Tumblr, and appear on the new Gods and Warriors website.

Winning entrants will also receive signed copies of The Burning Shadow, as well as a copy of the first book in the Gods and Warriors series, The Outsiders.

Taking part is simple. Just visit http://www.writeforthegods.tumblr.com where you will find some opening lines written by Michelle to get your entry started, along with step by step instructions for sending in your finished story. The first two winners will be revealed on 26 July, with two more unveiled every week until 23 August 2013.

If you’re stuck for a brainwave, Michelle’s top writing tips should come in handy:
Ask yourself: who is my main character? What do they like, hate or fear? Most importantly, what do they want? To escape a lion? Pass a test? Get to safety?
Next, ask: what gets in their way of achieving their aim? An enemy? A blizzard? Self doubt? Putting an obstacle in your character’s way, then deciding how they deal with it, will give you the basis of a story
Now make your story real. If it’s set in a forest, take a walk in one and pretend to be your character. Take notes on whatever strikes you, using all five senses
Then, start writing. Just get something down. (You can either write on paper first, or straight onto a computer, whatever feels right for you.)
Now read your story through as if you were a new reader. Is anything unclear? A bit boring, wordy or unnecessary? Change it! You can rewrite anything. It’s your story. You’re in charge.
Finally, reading your story out loud can really help, especially in writing natural-sounding dialogue

Gods and Warriors: The Burning Shadow is published in Puffin hardback on 1st August 2013. Follow on Twitter @PuffinBooks.
By Mr Ripley's Enchanted Books on July 26, 2013