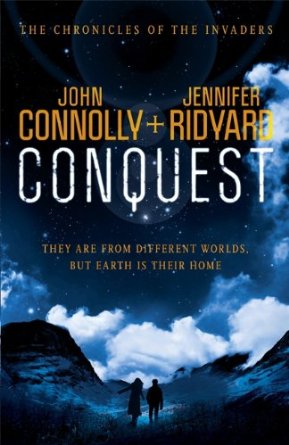 This is the first instalment within the Chronicles of the Invaders series, which has been written by John Connolly and his partner Jennifer Ridyard. It is an epic new science fiction series described by Connolly as "an adventure novel". Inspired by some of John's favourite films such as Ridley Scott's Blade Runner (one of my personal favourites), Alien and Invasion of the Body Snatchers. Never mind the additional influence from the novels of John Wyndham - all of the above might give you a hint and idea of what you may expect.
This book is an epic 400 page journey of sci-fi goodness that gripped me right until the very last page.  I was really surprised as to how good this book actually was, to be honest. It really was such an amazing read and a fantastic story. The best way to perhaps sum up this book is as follows: Star Trek meets Aliens but set on earth. It is smart, intelligent writing that ticks all the boxes for me.
There is a strong female and male protagonist which will appeal to all teenagers and adults who love crossover fiction and science fiction. The novel is set at a time when Earth no longer belongs to us; we have been invaded by a slightly more advanced race called the Illyri - a beautiful, civilised yet ruthless alien species.  A small faction of people called the Resistance Leaders wage war on the invaders with dramatic effect. The storyline is set in, and around, Edinburgh castle and the Scottish Highlands which I thought was a fantastic backdrop to an amazing story.

Full of visual characters (both human and alien) who are all seeking for attention is one great aspect of the book. Whilst another is through the gripping and fascinating dark side which runs throughout the story. Encompassing death and sorrow around every explosive corner as well as featuring some rays of warmth from the sun. The feelings and friendships of the characters struggling to overcome races and cultures are explored sensitively and, in my opinion, hold a very strong key to the plot which really pulls off the stark reality to what occurs in the story. The action-packed, explosive and technical battle scenes will have you in awe; they really are some of the best that I've read within this genre for some time.

I enjoyed reading this book immensely - the imaginative qualities are on another plateau. I will even go as far to say, that it is out of this world. John and Jennifer are a great writing duo. They have created a book that will definitely be in my top reads for the end of the year. I believe that the sequel will be rocketing onto my wish list once it has been published next year.
Published by Headline (Hardback) -  26 September 2013
By Mr Ripley's Enchanted Books on September 13, 2013