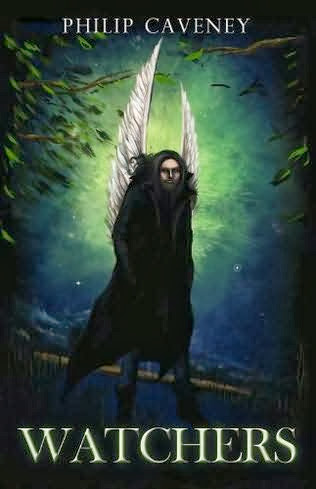 I first started this blog back in 2008, if you search back that far you will actually find a post for Philip Caveney's 'Watchers' as an unpublished version. Five years on, I never thought that I'd actually get a chance to read the full book or even see it published. I've been watching, waiting and even flapping my wings waiting to read this. Fortunately, the wee independent  Edinburgh based publisher Fledgling Press have done the honours of publishing it and rightly so. They've commissioned a fantastic front cover by Kylie Tesdale that might just make it on the list of this year's 'Book Cover Wars' perhaps . . . . what do you think?

After all of these years, was the book worth waiting for? Well, the answer is a resounding YES!
I loved every page of this book, in fact so much so that I would have liked to have read even more. It has a really good feel factor to it; a brilliant family read that everyone will enjoy from eight to eighty. It will lift your spirit and soul to enjoyable levels but, at times, it will also take you on a ride that may drag you down to hell.
This book is very cool - kids will relate to it on many levels. They will discover a ripping good story behind the book cover. It's very funny and witty - you will find yourself chuckling along to some of the antics from each character. However, it's also sad as well as Will Booth has to come to terms with the death of his father in a fatal car accident. Struggling to come to terms with his life, he has a chance encounter with a mysterious tramp called Ari. Will discovers that Ari is a member of a band of new age travellers - The Watchers - a group of fallen Angels that have been cast out of heaven in the "great war". The characters are very well written and somewhat quirky.
These angels have been sentenced to travel the earth, making up for their past sins, by helping mankind. However the second band of angels, led by the dark and sinister Lou, bring an evil and cruel element to the story. They devote themselves to causing mischief and have their sights on adding to troubled times for Will and his friends. I loved the idea of 'Hells Angels' being real angels and riding Harley Davidson motorbikes causing mayhem - this was really fun to read.
I would love for many people to read this book, so you may need to track a copy down.  Philip has a great skill of blending his imagination which he uses to great effect in all his books. He really grounds the story in reality whilst also adding a large dollop of strong idealistic ideas which make the whole story sing. It reads like lightning; it is  an adventure with wings that will keep you entertained throughout the journey. This is a fantastic and memorable piece of fiction which was well worth waiting for. It is one that I hope you will also enjoy.
Be a devil and pick up a copy. Read it and let me know your thoughts.....
Published by Fledgling Press (16 Sep 2013)
By Mr Ripley's Enchanted Books on September 23, 2013